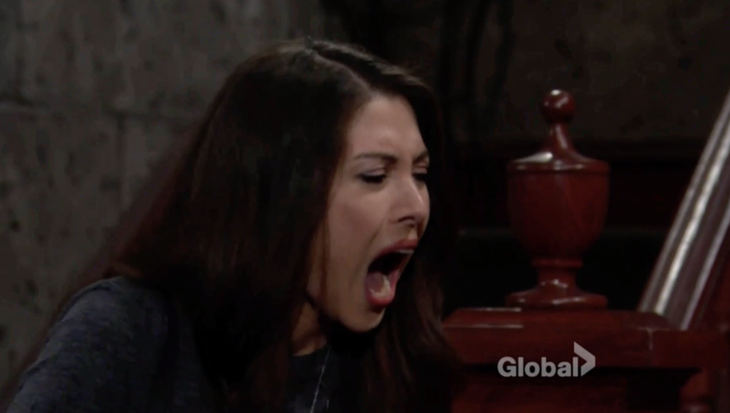 “The Young and the Restless” spoilers for Friday, September 22, tease that Juliet (Laur Allen) will feel better about her chances with Cane (Daniel Goddard). After they wrap up their bonding session, Juliet will likely gloat about her good news. She’ll want Hilary (Mishael Morgan) to know that her efforts are paying off.

Of course, Hilary has been coaching Cane on how to reunite with Lily (Christel Khalil). She certainly won’t like the idea of Juliet distracting Cane from his mission. Hilary can’t keep Jordan (Darnell Kirkwood) away from Lily if Cane’s cozying up to his “baby mama.”

Related: The Young and the Restless Spoilers: Cane Doesn’t Lose Hope – Will He Win Lily Back?

“The Young and the Restless” spoilers say Hilary will offer a disheartening warning. She’ll insist that as soon as Juliet pops out that kid, Cane’s interest will disappear. Unfortunately, Juliet won’t have a shot at a snappy comeback. She’ll cry out in pain as she deals with a sudden pregnancy issue. Juliet will sit herself down on the stairs at the club. She’ll definitely be worried about her baby’s health.

Juliet will undoubtedly be rushed to the hospital, but that’s not the only drama happening on the CBS soap. Other “Young and the Restless” spoilers say Victoria (Amelia Heinle) will bump into Jack (Peter Bergman). She’ll be prepared to stomp off, but Jack will encourage her to join him.

When Victoria raises an eyebrow at the suggestion, Jack will remind her that they’re supposed to be friendly competitors. He’ll think Victoria should be willing to exchange pleasantries, but all she’ll be willing to give him are insults and threats. It seems Brash and Sassy’s war with Jabot is far from over. Y&R fans can expect some bold moves from these rival companies.

At The Underground, Scott (Daniel Hall) will pull Tessa (Cait Fairbanks) close for a hug. However, he’ll have an ulterior motive. Scott will whisper that the woman with Irv (Wayne Knight) is a hooker who knows Crystal (Morgan Obenreder). Tessa will look surprised by Scott’s revelation. She’ll want to get some info from Natalia (Tina Ivlev) if she can.

It sounds like a great episode is on the way. We’ll give you updates as other details and rumors emerge. Stay tuned to Y&R and don’t forget to check Soap Opera Spy often for the latest “Young and the Restless” spoilers, rumors, updates and news.