The Young and the Restless Poll: Do You Want Scott With Sharon Or Abby? VOTE! 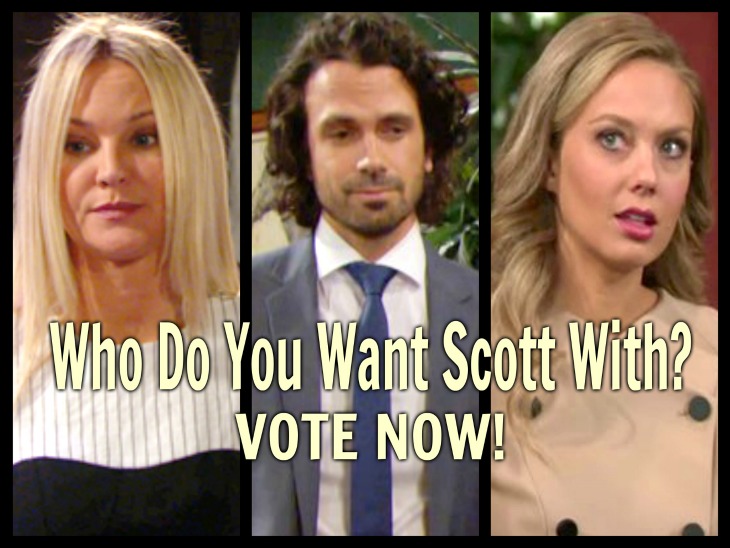 “The Young and the Restless” Scott Grainger (Daniel Hall) just recently took his relationship with Sharon McAvoy (Sharon Case) to the next level, but we have all also seen how he and Abby Newman (Melissa Egan) like to bicker back and forth as if they may have a little thing for one another. So our question to you is, do you want Scott with Sharon or Abby?

Y&R’s Scott and Sharon seem to be doing pretty good as a couple. Scott is very understanding of Sharon’s past and that is really good for her. She does not have to worry about him judging her.

He seems very happy with Sharon and when she had concern about him and Abby he did his best to put her mind at ease. He told her he only wanted to be with her, but some fans seem to have doubts about that.

Related: The Young and the Restless Spoilers: Zack is Shady – Abby Should Be Careful

There is no denying that he and Abby seem to have some type of relationship, but as to what hasn’t been very clear yet. They love to bicker with one another and give each other down the road, but the way that they do it comes off to some as flirting.

They spend a lot of time together being that they both work at Newman and seem to like being competitive with one another. So this could definitely turn into something more and before we know we could have a love triangle between Scott, Abby & Sharon. So who is the better woman for Scott?

Y&R’s Scott Grainger has not been back in town for a really long time and could of had almost any lady in Genoa City, but chose Sharon! So that there tells us something. He must really care about and have genuine feelings for her. She is definitely trying to turn her life around and who better to do that with than Scott. It’s definitely something new and fresh between them, but he and Abby seem like they could hit it off pretty good as well.

So Y&R fans, take a vote in our poll and let us know who you want Scott with Sharon or Abby? Make sure to check often with Soap Opera Spy for all your latest soap news, updates, spoilers, and much more!

WATCH: The Young and The Restless Preview Video Friday June 23

General Hospital: The Truth About Those Kelly Monaco Exit Rumors