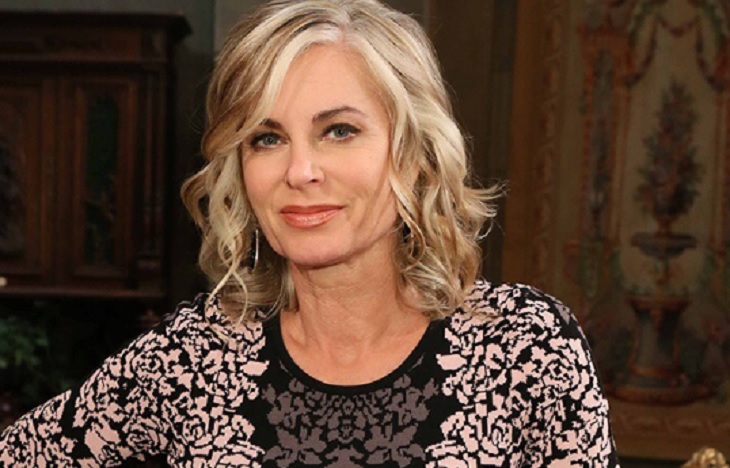 “The Young and the Restless,” Eileen Davidson, recently made a huge announcement and we have the details here.

Eileen Davidson, who plays Genoa City’s Ashley Abbott, revealed that she has a new movie in the works which is based off her second novel, Dial Emmy for Murder.

Dial Emmy for Murder picks up where her first novel left off, Death in Daytime. It centers around the the same main character, Alexis Peterson, a daytime soap opera star whose co-presenter goes missing on the night of the Daytime Emmy Awards show.

As an industry insider, Alexis helps the police solve the case as the body count rises. So you will find her always in trouble when she’s trying to figure things out.

Eileen Davidson wrote four soap mysteries in all and is currently writing the second draft for the book that was chosen for the movie.

Eileen reported to daily dish that she will be staring in the film, as well as co-writing, and is going to be the executive producer. So this is great news for her and very exciting.

Eileen Davidson shared on social media just how happy she was for her new gig. She is a very busy woman. Not only does she play a huge part on “The Young and the Restless,” but she is also stars in “The Real Housewives of Beverly Hills.”

She also played on “Days of Our Lives,” portraying the part of Kristen DiMera, and at one point she played five characters simultaneously.

Given Eileen Davidson’s background you can count on her new movie having plenty of drama. Her movie should start filming this summer, but there’s no actual date  set in place. When there is more information available surrounding her new movie we will be sure to let you know.

Related: The Ultimate Young and the Restless Trivia

In the meantime stay tuned to CBS’s “The Young and the Restless” to watch Eileen Davidson in action and don’t forget to check often with Soap Opera Spy for all your latest Young and Restless spoilers, news, updates, and much more.