The Walking Dead Season 7B Spoilers: Daryl Ready To Fight – Revenge on Negan! 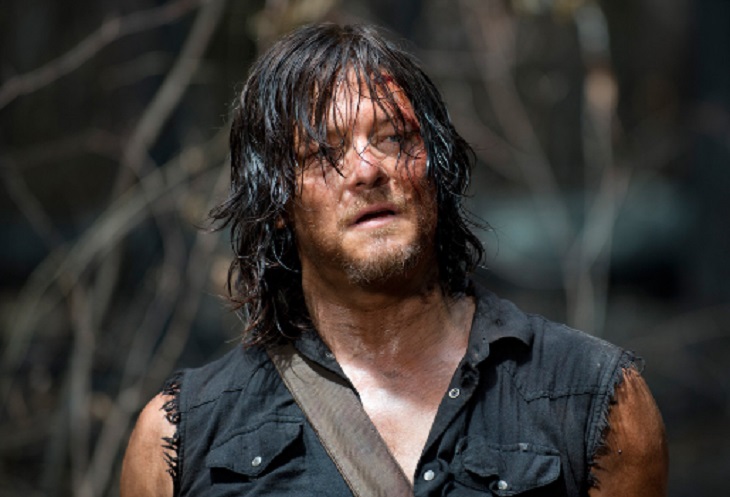 We are now just a couple of weeks away from the second half of Season 7 of “The Walking Dead.” So with it closing in on us we have a little more information and TWD spoilers on what you can expect.

During the first half of Season 7 Daryl Dixon (Norman Reedus) spent the majority of his time being held prisoner at the Sanctuary with Negan (Jeffrey Dean Morgan) and the saviors. Daryl was able to maintain his sanity, even though it did seem he was about to reach his breaking point.

The Walking Dead spoilers tease in the second half of Season 7 Daryl Dixon will be ready to get a little sweet revenge. Now that he has escaped from Negan and his people, he is full of rage and ready to make them pay for all they have done.

Norman Reedus explained what’s going on in Daryl’s mind in Season 7B during an interview with Entertainment Weekly he revealed “He wants revenge. He’s ready to fight. When he goes back in that last episode and hands Rick back his stuff, it was like, Let’s go! Let’s go beat this guy up.” So just by that you know Daryl means business.

In the first half of Season 7, Daryl felt as if the deaths of Glenn Rhee (Steven Yeun) and Abraham Ford (Michael Cudlitz) were his fault, but now in the second half he will have a different mindset.

Daryl Dixon will suggest that they blow up Negan and the saviors, but he is reminded that not everyone is there by choice. Like Daryl, they are some others being held prisoner too. So we may just see Rick Grimes (Andrew Lincoln) and his people rescuing them as they fight the war against Negan.

The Walking Dead spoilers also indicate we will actually see a side of Negan that we have never seen before in the second half as well. Negan has always been so fearless, but that’s all about change. Norman Reedus also revealed in his interview “I think you’re going to start to see a little fear in that bad guy’s eyes.” It’s about time Negan pays for the things he did. Do you Walking Dead fans agree?

Related: Who Will Die Next On TWD Season 7?

If you are familiar with “The Walking Dead Comics” then you know Rick tries to kill Negan but is not successful. However, they do win the war and take Negan prisoner, but he escapes only to taunt Rick. So if they continue the storyline as the comics go then we will be seeing a whole lot more of Negan.

After all, Jeffrey Dean Morgan did make a statement several months ago that Negan will put Rick through hell for the next couple of years. So stay tuned to AMC’s “The Walking Dead” to see what the future holds for all. Don’t forget to check often with Soap Opera Spy for all your latest Walking Dead spoilers, news, updates, and much more.