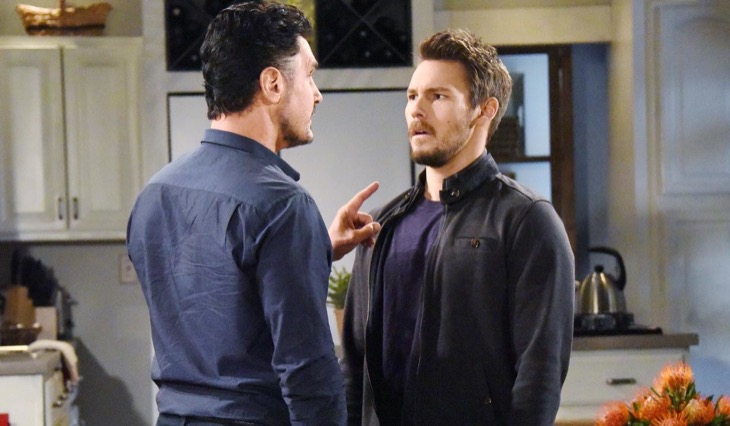 “The Bold and The Beautiful” spoilers have revealed Bill Spencer (Don Diamont) has no shame in doing what he must to get what he wants, and what he wants is to destroy Sally Spectra (Courtney Hope). First things first, Dollar Bill needs to split up Sally and Thomas (Pierson Fode`), and with Caroline (Linsey Godfrey) in town Bill went to work. Bill knows that the only person in Thomas’s life that means more to him than anyone, would be his son Douglas (twins, Leighton and Jackson Rapo).

Thomas who is excited to see Caroline (Douglas’s Mother) and Douglas, he is hoping to introduce them to Sally. Bill steps in and tells Thomas that the reason Caroline is back is she’s very sick, that she is dying from a rare autoimmune disease, and his (Thomas) only obligation is to Caroline and their son. Bill shares that Caroline did not want anyone to know but Bill thought Thomas had a right to now. Bill continues to play upon Thomas’s feelings that he still loves Caroline, and tells Thomas he needs to be there for them during this time.

“The Bold and The Beautiful” spoilers reveal that Liam learns through a conversation with Wyatt the sob story Bill has told Thomas. Liam decides he can not just sit by and let his dad get away with it, so he goes to confront Bill about this awful lie. However, Bill is not going to let his morally right son ruin his plans. Bill tells Liam to stay out of his business and threatens him in case he decides to let Thomas know that Caroline is NOT dying.

Related: Wyatt Has A Date – Steffy Confronts Ridge, Lashes Out At Dad Over Quinn

Disgusted with his dad, Liam goes and shares with his wife Steffy the details of Bill’s deceit. However, Steffy has never been a Sally fan and her reaction to Bill’s actions was not what Liam expected. Could the enjoyment Steffy has in the downfall of Sally cause trouble in Liam and Steffy’s marriage? Will Bill succeed in his efforts to destroy Sally? Will Liam let the truth be known that Caroline is in fact not dying?

Leave us a comment below sharing your thoughts with us. “The Bold and The Beautiful” airs weekdays on CBS. Be sure to check back with Soap Opera Spy for all the latest news, spoilers, and rumors!