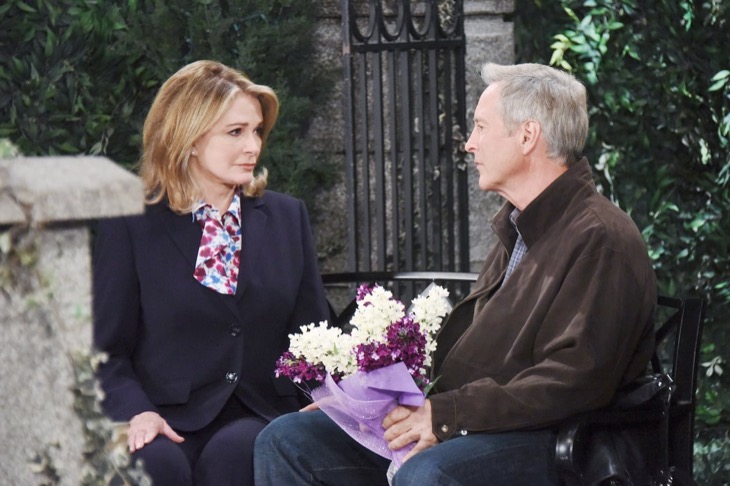 “Days of Our Lives” spoilers for the week of August 7-11 tease that Marlena (Deidre Hall) will find herself in a real bind. At the psychiatric facility, she’ll start to panic. Marlena just won’t see any way out of her current situation. She’ll beg the staff to let her go free, but they won’t be willing to release someone who seems unstable.

The shrinks believe Marlena is actually Hattie (Deidre Hall) and she’ll struggle to convince them otherwise. “Days” spoilers say Marlena will insist that she’s Dr. Evans and Hattie took her place. She’ll do everything in her power to make them see the truth, but they’ll just sedate her and stick her in a padded room.

“Days of Our Lives” spoilers say Marlena will feel like she’s never going to get out of there. She’ll hate the circumstances she’s dealing with, but she’ll be even more concerned for John (Drake Hogestyn). Marlena will have other loved ones on her mind as well. She’ll fear that Hattie will cause some serious damage.

Obviously, Marlena’s fears are warranted. DOOL fans know that Hattie is teaming up with Anjelica (Morgan Fairchild) and Bonnie (Judi Evans) for a sneaky plan. They’re all playing separate parts in this scheme, but they’ll find ways to help each other out.

“Days of Our Lives” spoilers state that Hattie will move her portion of the plot along this week. She’ll finally bring some relief to John when she returns to him. John will wonder where “Marlena” has been. He’ll suggest that he was worried sick, but he’ll at least be happy she came back.

Hattie will point out that she’s just giving John some closure. When she refuses to go home with him, John will ask what’s going on. He’ll immediately realize “Doc” isn’t quite herself. Hattie will do her best to sell her story. She’ll tell John that they’re through and he’ll be left in shock.

John just won’t understand how “Marlena” became angry enough to dump him. He knew she wasn’t a big fan of his missions, but he never expected this kind of backlash. It sounds like John is in for some heartache, but he won’t give up on his love.

Will John be able to solve the mystery and save the real Marlena? We’ll give you updates as other “Days” news and rumors emerge. Stay tuned to DOOL and don’t forget to check Soap Opera Spy often for the latest “Days of Our Lives” spoilers, rumors, updates and news.

The Young and the Restless Spoilers: Jack Goes After Revenge – How Far Will He Be Willing To Go