The Bold and the Beautiful Spoilers Monday August 7: Wyatt Has A Date – Steffy Confronts Ridge, Lashes Out At Dad Over Quinn 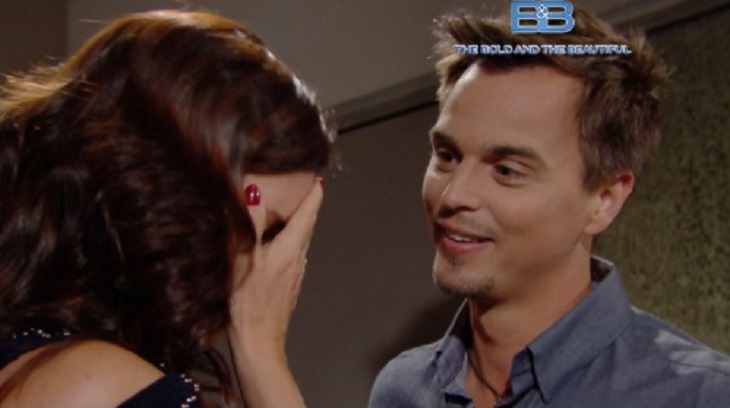 The Bold and the Beautiful (B&B) spoilers for Monday, August 7, 2017 reveal that Wyatt Spencer (Darin Brooks) and Katie Logan (Heather Tom) spent plenty of time together working on the Spencer Summit with the fashion showdown between Spectra Fashions and Forrester Creations.

They begin to deepen their friendship with some stolen kisses and intimate moments but Katie tries to halt things when she is confronted on their attraction to each other.

Related: The Bold and the Beautiful News: Heather Tom Attacked On Twitter

B&B sources tease that Wyatt will be excited when he is asked out on a date and fans cannot help but hope it is with Katie, even after she told him to broaden his horizons after watching him flirt with co-workers.  She tells him they can’t make out like teenagers and Monte Carlo was a mistake.  How do you feel about Katie and Wyatt’s budding relationship?

The Bold and the Beautiful spoilers reveal Quinn Fuller Forrester (Rena Sofer) may have been thrown out of the Forrester mansion by her estranged husband, Eric Forrester (John McCook) after he found out she had been kissing his son, Ridge Forrester (Thorsten Kaye).

Eric Forrester has been known for his forgiveness and kindness but B&B fans are fairly certain by his reaction that he is done being walked over and being made to look like a fool.

B&B’s Steffy Forrester (Jacqueline MacInnes Wood) has always been closest family member to her grandfather, Eric and now that she knows what caused Eric to leave his own home and alienate himself from his family; she is on the war path and her target is her own father, Ridge.

The Bold and the Beautiful spoilers reveal Steffy will confront him on his deception and destruction of his father and Quinn’s marriage.  How will Ridge handle being berated by Steffy, who isn’t exactly the role model for fidelity and will her confrontation have dire consequences for Ridge in the professional capacity as well?

Be sure to tune into CBS’ The Bold and the Beautiful (B&B) on Monday, August 7, 2017 to catch up on all these stories and more.  Check Soap Opera Spy often for updates, news, rumors and more B&B spoilers right here!