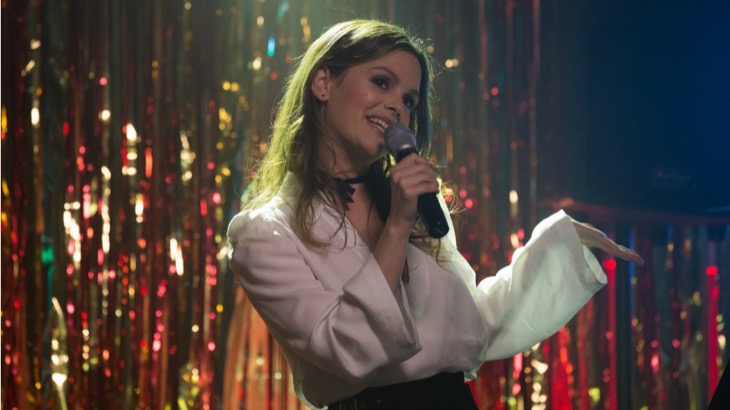 Rachel Bilson is more than just a pretty face, but her fans already know that as a fact! The Hollywood actress recently showed off her impressive singing skills on the hit CMT show Nashville, leaving audiences wanting for more.

The 35-year-old television star showcased her hidden talents during Thursday night’s episode. Rachel plays Silicon Valley marketing expert Alyssa Greene. During the show, she managed to show off her singing chops with a little liquid courage during a karaoke scene. Rachel actually stole the show by singing Ray Charles’ classic, ‘You Don’t Know Me.’

In fact, Rachel even teased that audiences will be seeing a different side of her through her character Alyssa earlier this summer. She told Entertainment Tonight in an interview, “My character might get drunk enough to [sing]. That might happen. She’s not going to be belting out any country ballads, but she might have a tipsy tune in there somewhere.”

Rachel also opened up about Alyssa, saying that she’s never played a character like her on television before. That’s why she jumped at the opportunity when Nashville called her.

It was something that I hadn’t done before and that was definitely appealing,” she said. “I liked that she was strong. She was a strong female character, which I think is so important, especially nowadays. I liked that I knew nothing about anything that she represented. It was a challenge for me and I liked that. I like stepping into characters who are unfamiliar and not a lot like myself.”

Nashville Season 5 airs every Thursday at 9 pm EST on CMT. Tell us, are you surprised to hear that Rachel Bilson has a great singing voice? Sounds off by dropping us a line with your thoughts in our comments section below. Also, don’t forget to check back with Soap Opera Spy for all the latest news and updates on Rachel Bilson and Nashville Season 5 spoilers right here!

The Young and the Restless Spoilers: Jack Goes After Revenge – How Far Will He Be Willing To Go

Will Y&R Unleash Its Own Sheila Carter? There Are Many Villains To Choose From!