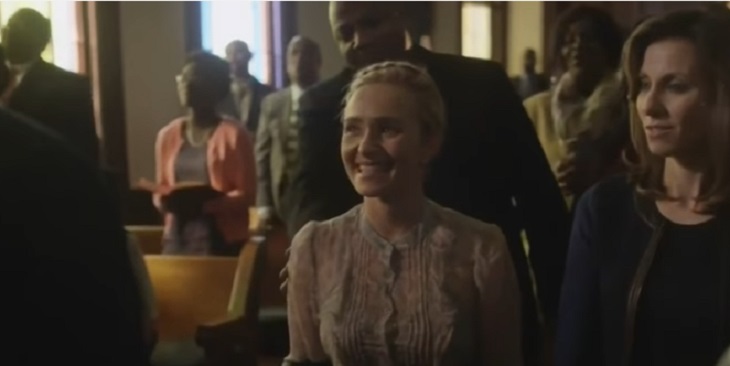 ‘Nashville’ spoilers for season 5, episode 6 titled ‘A Little Bit Stronger,’ reveal that Rayna Jaymes [Connie Britton] and Deacon Claybourne [Charles Esten] find themselves in a potentially dangerous situation after Rayna’s run in with Carl Hockney [Linds Edwards] a crazy fan who could be her a stalker.

Obviously, Rayna and Deacon became increasingly concerned about Rayna’s stalker after he barges into Highway 65 with an envelope screaming about letters he has sent to Rayna. Deacon and Rayna decide it’s time to reinforce the security at their home, ‘Nashville’ spoilers for season 5, episode 6 reveal.

In a preview clip Rayna asks Maddie if she knows Clay can go to jail for dating a minor. A petulant Maddie accuses Rayna and Deacon of not liking Clay because he’s black.

Juliette Barnes [Hayden Panettiere] will become increasingly closer to and dependent upon Hallie Jordan [Rhiannon Giddens] for spiritual guidance. Juliette is still searching for answers to the question – why did she survive the plane crash when everyone else died.

‘Nashville’ spoilers for episode 6, season 5 reveal that Juliette, who has stopped taking her medications because she doesn’t want to become addicted, tells Avery the reason she has sought out Hallie’s friendship and guidance.

“I’m not doing this because it helps me. I just feel like you want me to be unhappy,” Juliette accuses ex-husband Avery Barkley [Jonathan Jackson] in a ‘Nashville’ spoiler clip.

Since Juliette’s return, ex-husband Avery Barkley [Jonathan Jackson] has devoted himself to the singer’s recovery and their young daughter Cadence. The former married couple seemed back on the road to repairing their broken relationship.

As Juliette pushes her ex-husband away, ‘Nashville’ spoilers indicate Avery will trust in himself and jump back into performing. This could drive a deeper wedge between Juliette and Avery.

‘The Young and the Restless’ Spoilers: Cane Allows Billy to Get Under His Skin – Far Too Brash and Sassy

The Young and the Restless: Jack and Gloria Connection Is a Stretch – Nearly Impossible To Believe