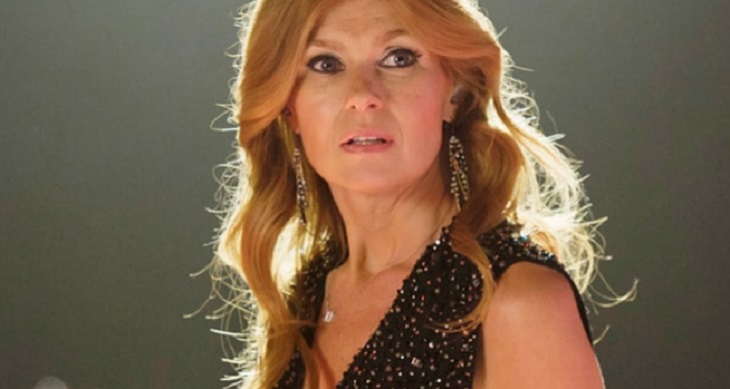 ‘Nashville’ season 5 premiers on CMT with a 2-hour special event Thursday, January 5. Connie Britton [Rayna Jaymes] sat down with Ellen DeGeneres, thanking fans for their overwhelming support. Connie also addressed the rumors that she is leaving the show after only 10 episodes.

Connie dished with Ellen about what Rayna’s future on ‘Nashville.’ The talk show host asked the actress and singer if the rumors about Connie leaving the country music drama were true. Connie replied, “I’m in it. I’m in, I’m in for the duration!”

Nashies are thrilled to hear that Connie is not leaving the show because there is a lot of Rayna’s story left to be told. As ‘Nashville,’ under the direction of two new showrunners, will focus on relationships and the struggles in the music industry.

Connie divulged that the new writing will get back to what ‘Nashville’ is really about.

Connie Britton revealed that season five will be “an exciting new season.” Connie’s co-star and on-screen husband Charles Esten [Deacon Claybourne] has said the same thing – this will be best season of ‘Nashville’ ever.

‘Nashville’ fans got a sneak peek at the first hour of the season 5 premiere on Thursday, December 15. Rayna Jaymes struggling record label and career will most likely be one of the focal points of the new season. Juliette Barnes’ [Hayden Panettiere] life has been changed following the plane crash. Look for the writers to address how Juliette comes to terms with the hurt she has caused in the past.

After the two-hour premiere event on CMT stick around because Nashies will have a chance to participate in a Nashchat on the CMT Facebook page. The first ‘Nashville’ cast member to participate will be Chris Carmack [Will Lexington].

According to The Hollywood Reporter, Nashchat will become a regular part of the series after the show airs each Thursday night. ‘Nashville’ superfan and country music personality Amy Brown will host each week’s Nashchat afttershow.

Each episode will be come to Nashies live from the living room where the show shoots. Nashchat will feature interviews with the cast and crew, original music, as well as series insider and fan recaps from the previous week’s episodes.

Get ready Nashies! Connie Britton is keeping Rayna Jaymes in town! Will Deacon and Rayna be able to keep their marriage together? Will Rayna and Juliette form a new bond? Tune in Thursday, January 5 at 8:00 p.m. on CMT and find out. And don’t forget to head over to the CMT Facebook page for Nashchat at 11:00 p.m. ET.

‘The Bold And The Beautiful’ News: Pierson Fode’s B&B Return Date Revealed, Thomas Forrester Is Back!