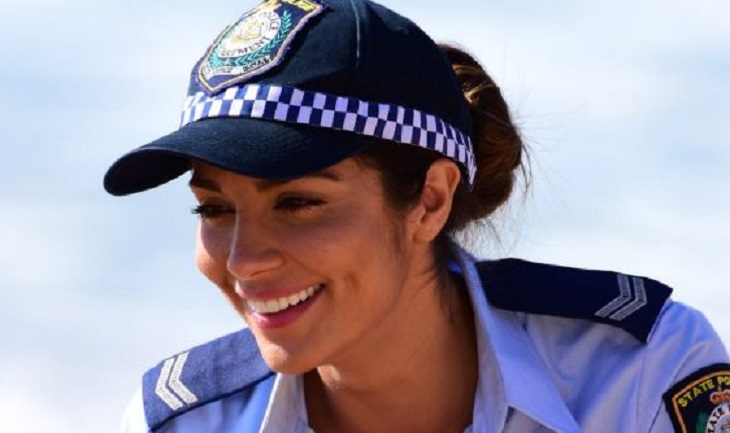 Is that engagement bling on “Home and Away,” actress Pia Miller’s ring finger? If it’s true that a picture’s worth a thousand words, then a recent Instagram pic indicates that congratulations may be in order for Pia and her boyfriend, Tyson Mullane! In the pic beautiful Pia sports a pretty fedora on top of her long tresses, along with some impressive sparkling bands on her left hand. Is she trying to tell us something?

In 2007 the model married AFL player Brad Miller; they divorced in 2015. Pia has two children, Isaiah, 14, and Lenny, 10. Pia’s road to celebrity began as a result of a Dolly modeling competition in 1998. The 14-year old blew away the competition, and she never looked back!

Related: Home And Away Spoilers: Ash And Kat’s Relationship In Trouble – Split In The Near Future?

In 2001 Pia won the title in the second season of, “Search for a Supermodel,” and from there her career hit the stratosphere, with the young woman being asked to model in several fashion campaigns. Since her debut on H&A, Pia has graced the covers of Marie Claire and Women’s Health. She appeared on several television shows as a guest actor before landing her current gig in 2014.

The Chilean-born actress began appearing as Katarina Chapman on the hit Aussie soap, “Home and Away,” in 2015. Kat is a dedicated police officer who’s currently embroiled in a heated debate with her onscreen boyfriend over parenting duties. When Kat’s partner Ash agreed to take responsibility for his orphaned nephew, she reassured the Summer Bay hunk that she was on board with his decision.

Kat adores the baby, but her career as a police officer keeps getting in the way of co-parenting. As the explosive drugs case against Zannis and Brody comes to a head, she must remain vigilant in order to bring down the bad guys.

Will the Latin looker keep us waiting on word of her social status? Let us know what you think is the meaning of her ring-finger jewels!

The Young and the Restless Spoilers: Hilary Doesn’t Care About Charlie and Mattie – Lily Mentions SORAS

The Bold and the Beautiful Spoilers: Will Nicole Snap And Want Lizzie Back?