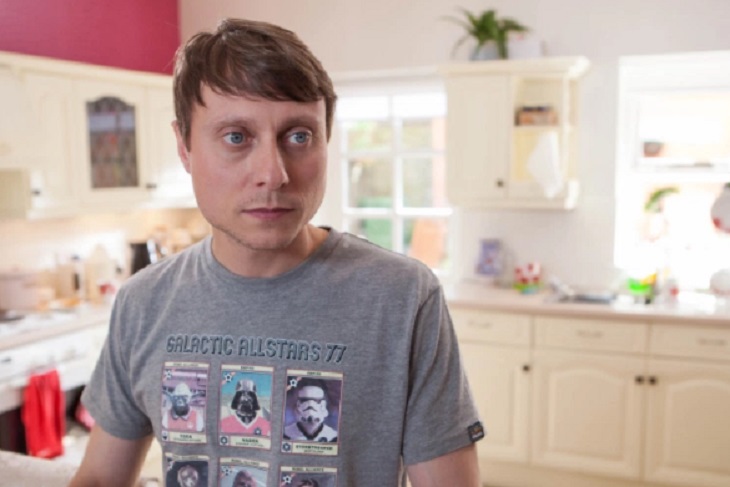 Milo’s (Nathan Morris) comeuppance is just around the corner on Hollyoaks. Will it ruin his holidays, or is the end to his ruse a huge relief for the baby-faced deceiver?

In the coming days Hollyoaks spoilers tease that Tom will again see an unusual side of Milo: his back. Milo’s back features a full-size tatt of angel wings, in what is quite an elaborate display of ink. The Latin words “Numquam Obliviscar” are also featured, which means, “I shall never forget.”

Tom finds this highly intriguing and he and Holly (Amanda Clapham) set out to find some background info on the mystery man.

What they discover is quite disturbing: all these months Milo hasn’t been honest about who he really is. This leads to an exchange in which misguided Milo is confronted with the truth. Will he crack like a Christmas walnut?

All this time Milo has kept mum about the awful truth surrounding the 2004 death of Tom and Holly’s parents. Milo was the one who killed the elder Cunninghams (Tom survived) in a horrific car crash.

Subsequently Milo has returned to Hollyoaks in a twisted attempt at making things right. His guilt over the deaths has never left him, and he thinks that helping out the Cunningham family will somehow make amends for his terrible deed. At least he’s trying, give him that!

Of course Milo hasn’t always acted like a choirboy since his arrival. But when he’s given the opportunity to come clean, what will he do with his chance at redemption? If Milo tells the truth, will the town turn against him?

And if he lies, will it be even worse for him when the truth eventually comes out?