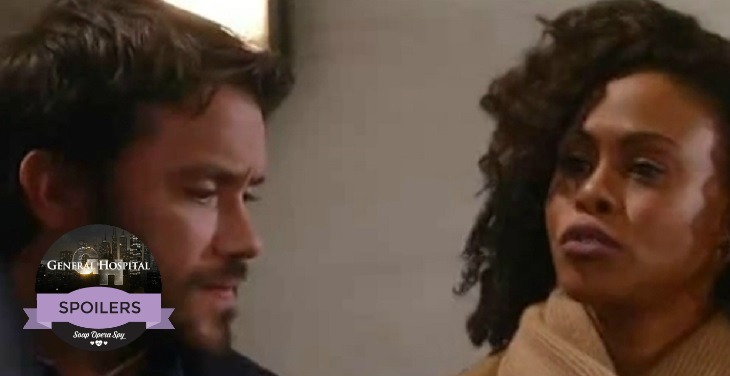 General Hospital spoilers for Thursday, January 12, 2017 begin with Anna Devane (Finola Hughes) meeting with Valentin Cassadine (James Patrick Stuart).  She’s had a couple hypnotherapy sessions with Dr. Andre Maddox (Anthony Montgomery) and reveals to Valentin she has learned a great deal since the last time they spoke.  Does she finally know who he really is and what their connection is?

Lulu Spencer Falconeri (Emme Rylan) comes to see Maxie Jones (Kirsten Storms) and her fiance, Detective Nathan West (Ryan Paevey) after they return from their trip to Canada searching for Claudette Beaulieu (Bree Williamson).  Lulu warns them that Valentin is a killer and Claudette crossed him and that is why she is dead.

General Hospital’s PCPD Police Commissioner, Jordan Ashford (Vinessa Antoine) and Detective Dante Falconeri (Dominic Zamprogna) arrive at Franco Baldwin’s (Roger Howarth) apartment with a warrant informing him they are there to collect evidence to connect him to the murder of Tom Baker (Don Harvey).  Will Franco reveal what he has learned about Alexis Davis (Nancy Lee Grahn) being the last person to be with Tom?

GH’s Elizabeth Webber (Rebecca Herbst) continues to fret over Franco and his torture of Tom Baker.  Laura Webber (Genie Francis) sees Liz at General Hospital and she questions her whether she believes Franco will be arrested.  Liz has been teetering between believing his innocence and whether her boyfriend is really capable of murdering a man.

Alexis Davis has been losing her sanity between alcohol withdrawals and trying to fill in the blanks from her blackout the night Tom was killed.  Her ex-husband, Julian Jerome (William DeVry) is trying to help her remember what really happened and comfort her in her time of need, but she is having a difficult time accepting help from him, after all, he is another man who betrayed her and attempted to kill her.  She had flashbacks to the night Tom Baker assaulted her, and remembers herself holding a bloody knife.

GH sources show Alexis picking up the phone and telling Julian she is turning herself in; do you think she defended herself and really killed Tom?

Be sure to tune into General Hospital on Thursday, January 12, 2017 to catch up on all these stories and more.  Check Soap Opera Spy often for updates, news, rumors and spoilers!

‘Days of Our Lives’ Spoilers: Deimos and Andre Face Off – Gabi Is Confused by JJ’s Request – Dario Hears About Eduardo’s Hunch