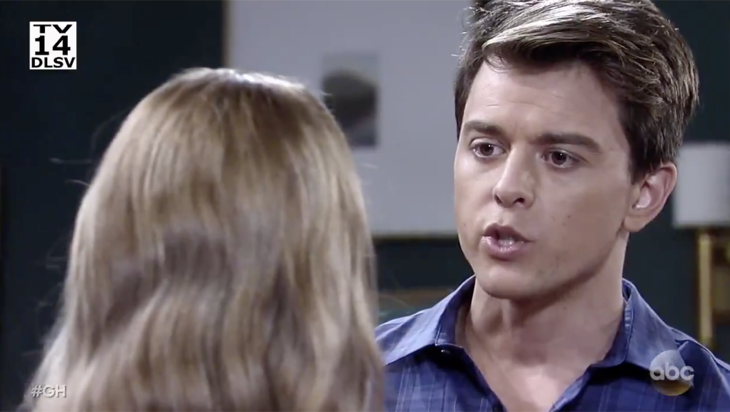 General Hospital (GH) spoilers reveal that Michael Corinthos (Chad Duell) has been moving forward with his lady love, Nelle Benson (Chloe Lanier), even after everything she has done to his parents and family; but GH fans can’t help wondering how far his parents, especially his mother will push him until he does something drastic, that could cost him everything?

GH sources at Soaps In Depth recently show that Carly Corinthos (Laura Wright) is awfully persistent when it comes to her son’s relationship with the home-wrecking vixen. Private Investigator, Felicia Scorpio (Kristina Wagner) uncovered some shocking news from Nelle’s past that her fiance Zachary Grant, died under mysterious circumstances weeks after he made a will giving her all of his wealth upon his death. Nelle seemed to explain the situation and Michael immediately defended her to anyone that had questions; but is that the end of it?

General Hospital spoilers reveal Michael is as stubborn as his mother when it comes to the person they love. Carly has made no qualms over her hatred and mistrust of the girl, but she doesn’t seem to understand, that she needs to step back and let Michael figure things out for himself. He is definitely his mother in the way that the more he is pushed to do something, the more he will push back.

GH spoilers confirm that Michael is about to make a big move when it comes to his and Nelle’s relationship and this is not going to go over well with his mother nor his father, Sonny Corinthos (Maurice Benard).

General Hospital head writer Shelley Altman continues to tease fans saying that Michael may not be as naive as people think, he has been through enough to not walk through life like its a fairy tale. He will continue to move forward with his life, and with Nelle continually hiding massive secrets like Zack’s death, he surely is walking with his eyes wide open and it will remain to be seen whether Michael can accept the past if there are more skeletons about to fall out of Nelle’s closet.

Be sure to tune into ABC’s General Hospital (GH) to catch up on everything happening between Nelle and Michael as well as how his big move effects all those around them. Check Soap Opera Spy often for updates, news, rumors and spoilers!