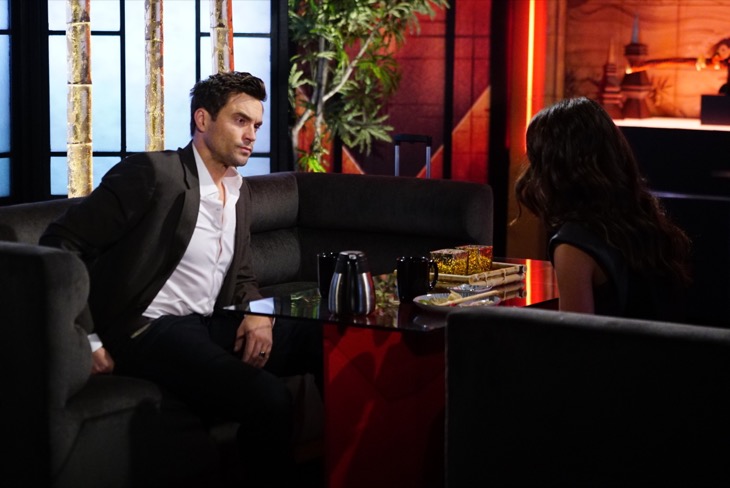 “The Young and the Restless” spoilers for Tuesday, July 25, tease that Cane (Daniel Goddard) will give Lily (Christel Khalil) updates on his job hunt. He lost his Brash and Sassy position after the sexual harassment lawsuit blew up, but he’s ready to start fresh elsewhere. Lily will hope that Cane’s search has brought some good results.

Cane will admit that he was hoping to get a job at Neil (Kristoff St. John) and Devon’s (Bryton James) company. He’ll suggest that it didn’t work out, but there’s another offer on the table. Cane will contend that Jack (Peter Bergman) is fascinated by what he could bring to Jabot.

Related: The Young and The Restless Preview Video Monday July 24

Lily may wonder if this position is a legitimate one. She won’t want Cane to get himself tangled up in anything shady. The last thing they need is more trouble right now. Cane will might argue that Jack simply values his skills, but this is really about taking down Brash and Sassy.

Meanwhile, Victoria (Amelia Heinle) and Billy (Jason Thompson) will fret about Jack’s plans. First, “The Young and the Restless” spoilers say Billy will listen to Victoria’s tirade. She’ll be miffed at the way Jack swooped in and took advantage of Nikki (Melody Thomas Scott).

Billy will believe Jack is going to use Cane to his advantage as well. He knows his brother can’t resist causing more drama. Victoria will vow to fight for her company’s future. She won’t think Jack’s plot will pay off. It’s clear that Victoria is fired up about protecting her business, but her health could put her mission on hold soon.

Other Y&R spoilers say Nick (Joshua Morrow) will head over to the television studio. He’ll march right up to Hilary (Mishael Morgan) and demand an explanation for the scandalous footage. Nick will feel like that was a low blow. He’ll vow to sue Hilary and shut the whole place down.

Hilary will insist that Nick’s case won’t stand up in court. Victor (Eric Braeden) was behind her 100 percent. Once Nick learns that Victor allowed this, he might prepare for another heated confrontation. We’ll keep you posted as other “Young and the Restless” news and rumors emerge. Stay tuned to Y&R and don’t forget to check Soap Opera Spy often for the latest “Young and the Restless” spoilers, rumors, updates and news.