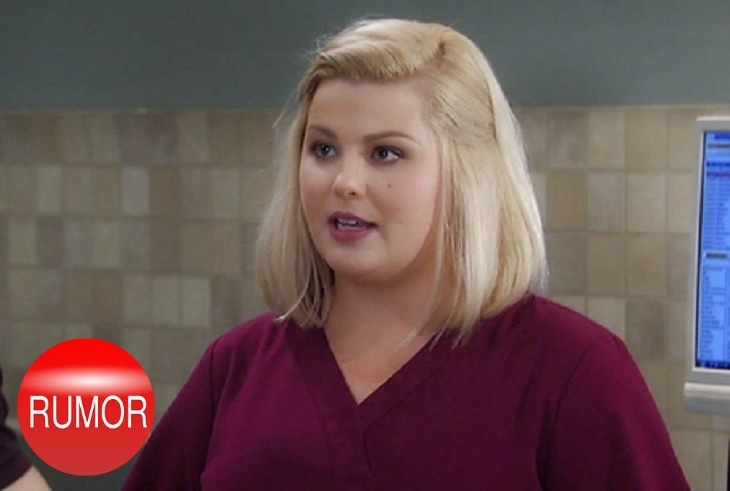 It’s hard to believe it’s been one year since Risa Dorken joined the General Hospital cast as Nurse Amy Driscoll. The new Amy Character resembles Amy Vining (Shell Keplar) from many years ago. The characters share similarities as being eavesdropping, intermeddling and somewhat intrusive to their coworkers. To anyone curious about the hospital staff’s private lives, Amy would be the one to ask.

Amy’s character description as “a spunky new nurse who just can’t help herself from gossiping and putting her nose in other’s business” was very accurate. GH fans first witnessed new Amy in May of last year at the hospital gossiping to Maxie Jones (Kristen Storms).

Related: Who Is a Better Father – Lucky or Jason? VOTE!

Amy hasn’t revealed very much of her own personal life but apparently has no immediate family in Port Charles. Fans learned Amy has a roommate, Kristina.

Amy was very excited about something good that has happened in her life. She hinted about it today to Dr. Griffin Munro (Matt Cohen) as they were standing at the nurse’s station. Nina (Michelle Stafford) interrupted their conversation looking for a recommendation for a pediatrician for Charlotte (Scarlett Fernandez).

Amy grabbed her and walked away from the desk. She called “Kristina” to say she could hardly wait to get home to share her good news. One can speculate its Port Charles’ own Kristina Corinthos-Davis (Lexi Ainsworth). Kristina moved recently from her Mother Alexis Davis’s (Nancy Lee Grahn) house to her own apartment. However, a roommate wasn’t brought up in the discussion.

General Hospital rumors are circulating that Kristina will be getting a new love interest. Kristina has been single since her break up with Aaron Roland (John DeLuca). Kristina admitted to Aaron she had been intimate with her professor Parker Forsyth (Ashley Jones) while dating him. Kristina’s heart is healing from Parker’s decision to stay with her wife and stop the divorce proceedings.

Related: Love, Honor, and Cherish: The Greatest Wedding Moments From All My Children, General Hospital, and One Life to Live

Its possible Amy and Kristina are more than roommates. Amy prefers to share coworker’s personal information instead of her own. She’s very comfortable learning all about others personal lives.

On the other hand, Kristina could very well be a new character. It wouldn’t be the first time for duplicate names for characters on canvas at the same time. Jason Morgan (Billy Miller) suffering from memory loss was going by the name Jake Doe while Elizabeth Webber’s (Rebecca Herbst) son Jake was brought back from the dead. Recently Olivia Jerome (Tonja Walker) went by “Liv” while Lisa LiCicero plays Olivia Falconeri.

None the less, fans are excited to meet this Kristina and learn Amy’s good news. The Nurses Ball is approaching so maybe she’s been officially asked to perform a solo this time around.

Tell us your thought on Amy’s secret and who you think Kristina could be.  And, don’t forget to check Soap Opera Spy for more General Hospital spoilers and news right here.