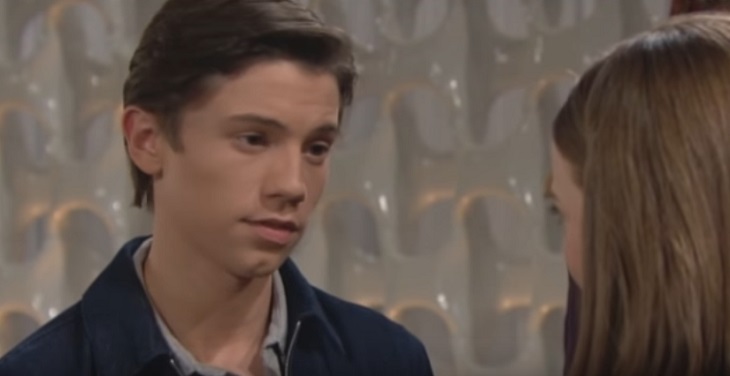 “The Bold and the Beautiful” spoilers for Thursday, March 30, tease that Thomas (Pierson Fode) will tell his unaware family members about Sally’s (Courtney Hope) tumble in Australia. He’ll explain that Steffy (Jacqueline MacInnes Wood) became enraged after Sally joined him at the wedding. Thomas thought everything would be fine, but Steffy just couldn’t tolerate the sneaky Spectra.

After their feud escalated, Steffy tried to escort Sally off the premises. Sally fell in the water and it caused quite a scene. Nevertheless, Thomas will contend that Steffy simply overreacted. He’ll feel like no one is willing to give Sally a chance.

Rick (Jacob Young), Zende (Rome Flynn) and some of the others will apparently back Steffy up. They won’t think Thomas should trust Sally or her team. The Spectras have proven to be bad news in the past. “The Bold and the Beautiful” spoilers say Thomas will argue that all of that is ancient history. He’ll push everyone to give Sally a clean slate.

Thursday’s B&B preview video shows Thomas declaring, “Whatever her aunt did years ago…the knockoffs, the stealing…it’s over.” Thomas will try to convince his family that the Spectras are harmless now, but Zende won’t buy it. He’ll point out that the Spectras have stolen designs before and they might do it again.

“The Bold and the Beautiful” spoilers hint that Zende will definitely be keeping an eye on Coco (Courtney Hope). She seems sweet, but he’ll worry that it’s just an act. When Coco and RJ (Anthony Turpel) check out Forrester’s new fashions, Zende will stay close. Coco will realize that suspicions are lingering around the office.

RJ will offer an apology for the Forresters’ rude behavior. He’ll indicate that he has faith in Coco and knows she’ll do a great job as an intern. RJ won’t think it’s fair that Coco gets treated differently because of her last name. Coco will appreciate the fact that RJ is taking her side. She’s typically judged for Spectra Fashions’ past sins, so RJ’s support should be refreshing.

Related: The Bold and the Beautiful — Most Shocking Moments

Elsewhere, Shirley (Patrika Darbo) will get irritated with Sally. She’ll insist that Sally can’t keep hanging out with the Forresters. Shirley is probably afraid Sally will allow her love for Thomas to cloud her view. They can’t afford to let romance interfere with their plans.

B&B fans can expect some hot drama in the coming episodes. We’ll give you updates as other details and rumors emerge. Stick with the CBS soap and don’t forget to check Soap Opera Spy often for the latest “Bold and the Beautiful” spoilers, rumors, updates and news right here.

General Hospital POLL: Who Is a Better Father – Lucky or Jason? VOTE!