General Hospital POLL: Who Is a Better Father – Lucky or Jason? VOTE! 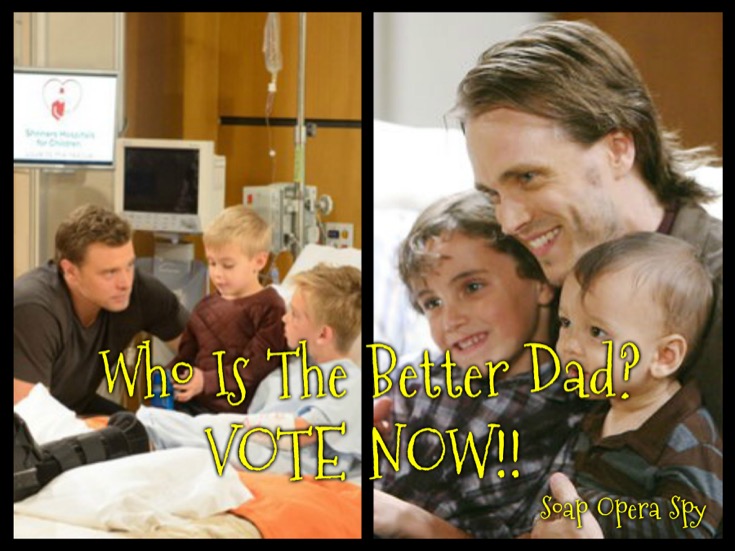 General Hospital’s (GH) Jason Morgan (Billy Miller) and Lucky Spencer (Jonathan Jackson) have had some great parenting skills and some major failures when it comes to being a dad; they clearly love their children, so which man do you think makes the better father?

GH’s Jason Morgan is a brand new daddy to sweet, baby girl Emily Scout, his third child in Port Charles. He also has two young sons, Jake and Danny. We have to begin with how strong a person he is to have made the decision to give up infant Jake to Lucky Spencer, because his job as a mob enforcer was far too dangerous a world for children.

When it was revealed that little Jake (Hudson West) was found alive a few years after he was presumed dead from a hit and run, Jason stepped up and became the father we all knew he could be. He never pressed about what happened while Jake was living on Cassadine Island, but now that he is having memories he may need to help him figure it out.

One strong suit Jason has is that he hates Franco Baldwin (Roger Howarth) with every fiber of his being. General Hospital’s Jason refuses to allow his son live under the same roof as Franco; some agree, while others don’t see the harm since Jake confides in his friend, Franco.

Surely General Hospital fans have a deep respect for him because he stepped up while others fled. Lucky, was by no means a saint, he fought his inner demons, even becoming a drug addict at one point, but he tried to be there 100% for his 3 sons; even after things were completely done with Liz.

He always felt he wasn’t good enough or didn’t have the paternal instinct because of his own upbringing; but he couldn’t be more wrong; as a father he was nothing like his dad, Luke Spencer (Anthony Geary).

Lucky was the one who did everything he could when he discovered Jake was alive and living on Cassadine Island. He even risked his own parents to return him to his mother, Liz. Do you think he would approve of Franco being young Jake’s confidant and be okay with him living under the same roof?

Please be sure to take out poll and let us know who you think is a better father, Jason or Lucky? Check Soap Opera Spy often for updates, news, rumors and spoilers!