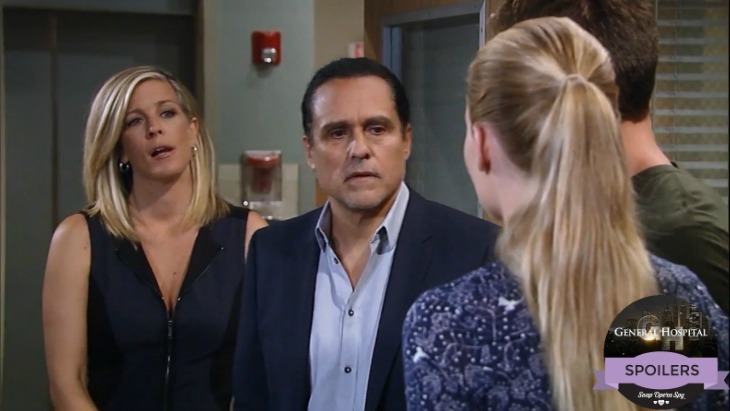 Carly lists all the circumstantial evidence they have against Ava but Sonny says it won’t be enough. Sonny wants Lucy (Lynn Herring) to testify. Carly says Andre (Anthony Montgomery) will testify and they’ll need to turn Morgan’s journal in. Sonny says Nelle owes them and needs to make amends.

Michael (Chad Duell) tells Nelle he’ll drive her home from the hospital. Nelle doesn’t want his pity. He insists pity has nothing to do with it. He wants to get to know her better. He wants Ava to pay for what she did to Morgan. Suffering isn’t the same as justice.

Nelle understands and regrets what she did to Sonny. He hopes she stays in Port Charles. Nelle isn’t going anywhere. They start to kiss when Sonny and Carly walk in.

Sonny tells Nelle they need to build a case against Ava. He needs to know exactly what she remembers about Ava being in Morgan’s room. Nelle thinks Ava had time to pocket the pills while in his room. Nelle agrees to give a deposition and Carly thanks her as they leave. Sonny is glad she’s helping but bad news is Michael not giving up on Nelle. Carly say they’ll have to tolerate Nelle while putting Ava away.

Nelle tells Michael he wouldn’t use her but Carly hates her for good reason. Michael and Nelle agree they’re more than just friends now.

Dillon ((Robert Palmer Watkins) tells Kiki (Hayley Erin) she feels guilty for what Ava did to Morgan and she’s pushing him away. Ava is her Mom not matter what and Kiki needs to visit her. Dillon walks Kiki to work.

Ava is having a vision of talking to herself. She’ll never be free of this pain and now this is her life. Ava thinks Kiki has turned her back and fears she’ll frighten Avery.

Ava is having a vision of herself standing over her bed saying rest and let go. Sonny and Carly are walking by Ava’s room. Kiki and Dillon arrive as Ava flat lines. The doctor says Ava is in V-Fib, calls for the crash cart and starts CPR. 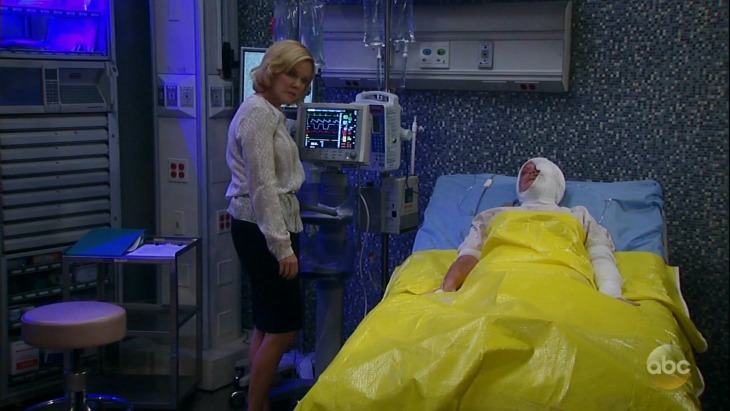 Jordan (Vinessa Antoine) tells TJ (Tequan Richmond) she and Curtis aren’t just dating they are a couple now. TJ says he’s cool with it and as long as she’s happy.

Stella (Vernee Watson) tells Curtis (Donnell Turner) that Jordan is a disgrace and a thankless tramp. Jordan will not keep her from visiting TJ while in town. Curtis admits Jordan’s made mistakes but they’re in the past. TJ loves Stella and she just needs to call him. She admits not calling TJ to avoid putting him in the middle. She thinks TJ will take Jordan’s side. Jordan was unfaithful to Thomas and that got him killed. Curtis changes the subject to dinner. Stella will make a list to go shopping. Curtis leaves the room as Stella hears someone knocking at the door. She opens it and hears Jordan say “Happy Birthday Baby”.

Alex (Finola Hughes) arrives to see Valentin (James Patrick Stuart) at the PCPD. The WSB doesn’t know her whereabouts. She wants to ensure he’ll go free. Valentin says she seduced him now wants to let him go free. He wonders what’s in it for her. Alex wants her freedom. She wanted to be sure she has his silence and not confess any wrongdoing to Anna. The WSB doesn’t have enough evidence to convict him. Alex says he’ll go free and come find her. “Just remember, all this time it wasn’t Anna you wanted, it was me”. Alex leaves.

Anna arrives to see Valentin and says he’s being transported to Netherlands to stand trial. WSB has no proof he took the Chimera so can’t prove he sold it to Helena. The Chimera is dead there is no wrong that needs to be righted. No reason to be separated from his child. Anna’s assignment ends when she hands him over to the WSB in a few minutes.

Valentin is upset because he wanted to see Charlotte (Scarlett Fernandez). He was going to be vague and reassure her. Anna sets up her phone so Valentin can do a video message for Charlotte. Charlotte means more to him than anything in the world. He has to take a long trip but doesn’t know how long he’ll be gone. He wants her to look in the sky to Polaris whenever she needs him and to enjoy her life with Lulu (Emme Rylan) until he returns. Anna wipes tears after he is finished taping. The WSB arrives to transport Valentin. They are handcuffing him as Anna signs the release papers. Anna signs it as Alex. Valentin tells Anna to get that message to Charlotte and he’ll figure out how to keep his promise.

The Young and the Restless RUMOR: Graham is Ashley’s Fraternal Twin – Dina’s Other Child Revealed?