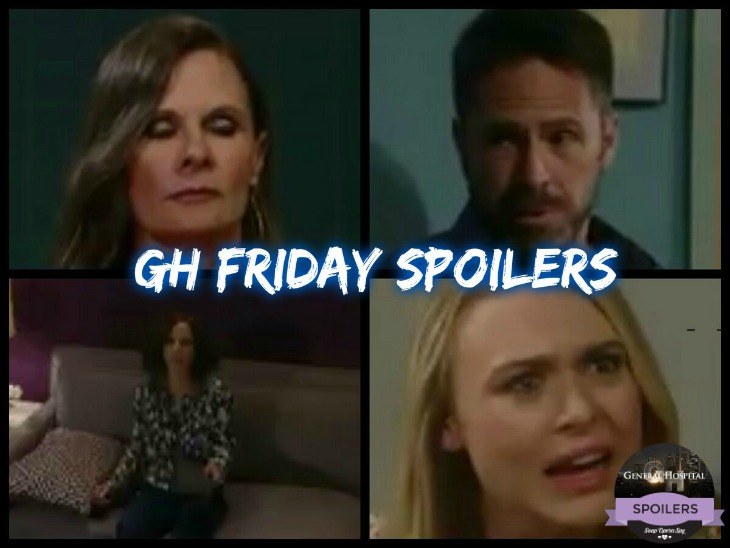 Just when Jordan Ashford (Vinessa Aintoine) thought everything was going so well with her and Curtis (Donnell Turner), she discovers that Aunt Stella (Vernee Watson) is in Port Charles and their confrontation is anything but friendly. These two will be having it out and will be re-hashing about the past and Stella makes it clear to Jordan that she has no intention of forgiving and forgetting their past.

Then over at the PCPD, Dante (Dominic Zamprogna) has brought Lucy Coe (Lynn Herring) in for questions in regards to Morgan’s death and has a few questions for her as to what she knows about the pill switch.

Will Lucy admit how long she has been keeping Ava Jerome’s (Maura West) secret? Could Lucy be looking at criminal charges for her part in what she knows?

It appears Julian Jerome (William DeVry) will be chatting it up with his lawyer, Scott Baldwin (Kin Shriner). General Hospital spoilers show Julian telling Scott in the previews that if there is hope for his grand-daughter, there should still be hope for him in beating the charges. Will the tide turn in Julian’s favor?

Then over at General Hospital, Ava is having a very difficult time as her condition goes from bad to worse when she slips into cardiac arrest and flatlines. Sonny (Maurice Bernard), Carly (Laura Wright), Dillon (Robert Watkins) and Ava’s daughter, Kiki (Haley Erin) are all awaiting news on Ava’s condition.

General Hospital spoilers tease that Kiki is feeling an increased amount of guilt in tomorrow’s episode and Carly is seen reassuring Kiki that she has nothing to feel guilty about, but Kiki disagrees. Will Kiki have a change of heart and stand up to the plate for her mother and take Dillon’s words to heart?  Or will her resentment over her mother’s part in Morgan’s death stop her once again? All this and much more in tomorrow’s episode of General Hospital- stay tuned!

EastEnders Spoilers: Everything You Need To Know About Walford’s New Family, The Taylors