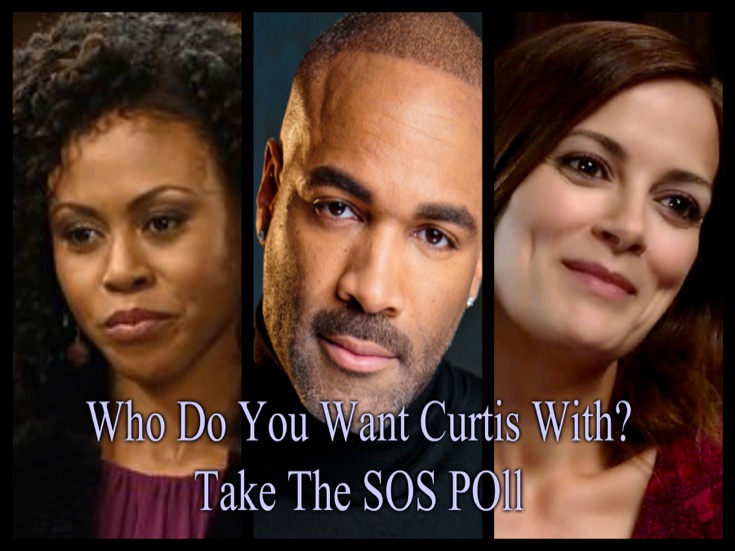 Ever since Curtis Ashford (Donnell Turner) came to Port Charles back in November 2015, he has been guilty of extreme eye candy; a lady’s man, a good friend, and an al l around nice guy. He has great chemistry with almost everyone he has met in Port Charles. He even has great rapport with Jason Morgan (Billy Miller). For a while it appeared he and Valerie Spencer (Brytni Sarpy) were an item however, she dumped him leaving him very available. The question remains though, who is better for Curtis? Let’s have a look at a couple of choices.

Curtis came to Port Charles to help Hayden Barnes (Rebecca Budig) investigate the shooting which put her in the hospital with a bullet in her head. He even stepped in to rescue her when Jason broke into Wyndemere and attacked Nikolas Cassadine (Tyler Chistopher). That proved to be a bad idea as he ended up with his face planted firmly on the floor. Despite this little incident, they have been best buds ever since, even exchanging a somewhat passionate kiss from a very drunk Hayden. It would appear She is available since she has stepped away from Dr. Hamilton Finn (Michael Easton) while he recovers from drug addiction. Is she the right woman for Curtis? They are good friends, she’s young and pretty and they do have good chemistry together. On the other hand, she seems to be in love with Dr. Finn and she does have a shady past. She came to town pretending to be Jason’s long lost wife before he regained his memory. She is Elizabeth Weber’s (Rebecca Herbst) half-sister, which most people would probably say this would disqualify her right from the start. She fell into bed with Nikolas even though she knew he was the one who attempted to kill her. She even plotted with Tracy Quartermaine (Jane Elliot) to take over ELQ. Over the past year, Hayden seems to have acquired some much-needed redemption. Maybe she would be a good catch for Curtis.

Jordan Ashford (Vinessa Antoine), undercover cop, police commissioner, and mother. Could Jordan be the woman for Curtis? They do have a history together. She was married to Curtis’ brother Tommy and they worked together before Curtis was removed from the police department because of his drug addiction. Although Jordan would not admit it, she did have feelings for Curtis but would not admit to it. She even went so far as to try get Valerie to leave him while they were dating. Is she the woman for Curtis or should he run straight for the hills? Jordan is a tough commissioner always trying to arrest the wrong perp. She is critical, judgmental and fickle when it comes to men. She dumped Andre Maddox (Anthony Montgomery) even though she claimed to care for him. She cheated on her husband with his brother and had been lying to her son about his real father. Ever since Curtis came to Port Charles she has been at odds with him. Why has she suddenly decided to give him a try? Will she decide to kick him to the curb once she finds out he is working as a private detective for the Morgan family? Curtis may be in for a world of hurt with this one. I would suggest he step lightly with this lady commissioner. You never know though, she may have seen the error of her ways and will be great for Curtis.

Perhaps we should consider the possibility of a third choice for this handsome knight in shining armor. After all many fans would say neither of the two ladies is good enough for Curtis. Ladies take a number and stand in line. Who do you think would be the ideal woman for a man who can rock a fedora, glow while wearing running shorts and who has earned the reputation of eye candy for all the ladies of Port Charles. Is there any woman in Port Charles who could answer this call? Maybe one of you ladies would like chance to rock his world. ABC spoilers do tease heart break ahead. You decide who is best for Curtis and be sure to vote in our SOS poll.

This Is Us Season 2 Spoilers: Did Jack’s Past Catch Up With Him, Poker Game Led To His Death?

The Young and the Restless Spoilers: Chloe Reappears – Kevin and Billy Affected By Criminal’s Words