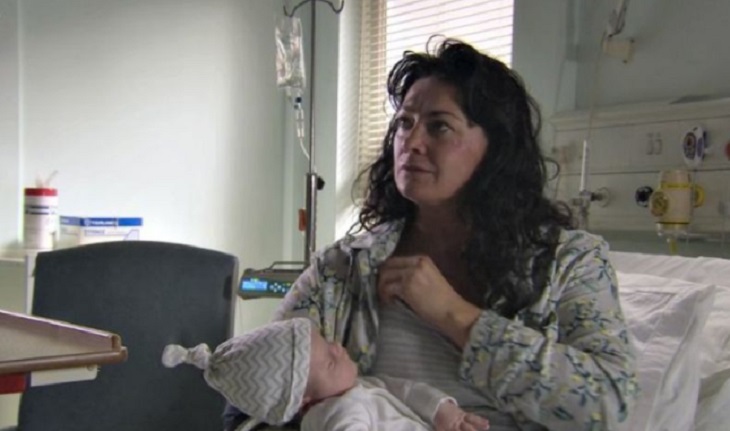 Moira Dingle (Natalie J. Robb) has been struggling with the concept of motherhood, and it’s not hard to see why. After a traumatic birth with a murderer present I think most women would be having a hard time. We saw Moira go into labour with Emma Barton (Gillian Kearney) who before this was planning to kill her! Not the most serene setting to bring a new born into the world.

But luckily both her and the baby survived, she gave birth to a little boy names Isaac. But once she took him home, things started to go wrong. Moira is showing signs of post-natal depression. She is having trouble with the child and after a series of actions she will do something which may take her son away from her, forever.

Related: How Much Do Your Favorite Soap Stars Earn? Emmerdale Salaries Revealed!

It will start with well-wishers congratulating her and wanting to coo over the child. Moira herself is not ecstatic about the existence of her baby and this will only make her sad. But being the strong woman that she is, she does not talk about these feelings to anyone.

Things will get worse when the baby falls ill, Emmerdale spoilers tease that a doctor will tell Moira that it is nothing serious and she should remain calm. But that is when she snaps, she does not think that she is capable of taking care of Isaac, even with support from Cain (Jeff Hordley), well when he shows up. He is not exactly going to win any awards for Dad of the year.

Moira will be overcome and leave the child at the hospital, she drives home thinking she can’t possibly provide for Isaac. But thankfully she quickly realizes what she has done, after some coaxing from Faith. She speeds back to the hospital to collect her son. But she may not be able to take him home once more. Social services may get involved and take her child away, viewing the stunt as an act of neglect. Do you think this is fair, should Isaac be taken away from his family?

Let us know what you think and check back right here for more Emmerdale spoilers!