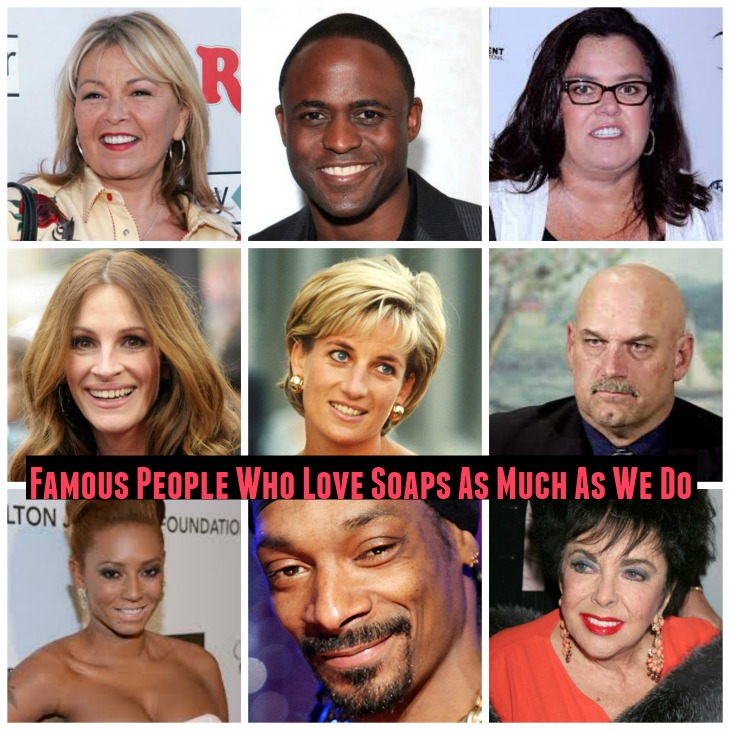 We all have our favorite soaps, but you may not realize that celebrities are just like us and share a secret addiction to daytime drama. Many stars try to make out like they’re “above” TV watching and are deep thinkers who sit around reading and pondering high art. That’s why we love actors like Jennifer Lawrence who’s refreshingly frank about her viewing habits – she’s deep into reality shows like “Keeping up With the Kardashians” and even got “Hunger Games” co-stars Liam Hemsworth and Josh Hutcherson hooked on “Vanderpump Rules.” Other actors and athletes are also harboring secret TV addictions and today we expose 15 stars you may not have known were soap opera junkies.

#1 Mel B – All My Children
Though Mel B is a Brit, she now rejects UK soaps like Eastenders in favor of All My Children and the America’s Got Talent judge even shot a promo for the ABC soap proclaiming herself a fan.

#2 Princess Diana – General Hospital
The people’s princess apparently had a secret habit – she was a fan of ABC’s “General Hospital” and even sent spendy Bollinger champagne to Luke and Laura portrayers to celebrate their on-screen wedding.

#3 Chandra Wilson – All My Children, One Life to Live, General Hospital, The Young and the Restless
When it comes to soaps, “Grey’s Anatomy” star Chandra does not play. Dr Bailey may be tough on screen, but the actresses relaxes by binging all her favorite soaps and calls it her daily escape.

#4 Snoop Dogg – One Life to Live
The legendary rapper grew up watching the show with his mom and is a big fan of Bo Buchanan [Robert S. Woods]. He’s even done a couple of cameos and revamped the “OLTL” theme song.

#5 Wayne Brady – The Young and the Restless
The Let’s Make a Deal host grew up watching soaps with his grandmother and even made her dreams come true when he landed a cameo for the two of them to appear on “Y&R” one Mother’s Day.

#6 Monica Lewinsky – Days of Our Lives
President Clinton’s favorite intern has said, “Days of Our Lives adds spice to life” and even wrote a poem about DOOL that was published in her high school yearbook. Maybe that explains her workplace affair…

#7 Elizabeth Taylor – General Hospital
At the height of her fame, Elizabeth Taylor was a mega-fan of GH so writers created the character of Helena Cassadine for her so she could show up at Luke and Laura’s wedding to curse their union!

#8 Shaquille O’Neill – General Hospital
Although Shaq has said he grew up watching Days, the hoopster did a shout out to GH in his autobiography comparing his feud with Kobe Bryant to the Luke, Laura and Robert Scorpio drama.

#9 Julia Roberts – Days of Our Lives
The Oscar-winning Pretty Woman is such a fan of DOOL that she asked to be seated near the cast one year at the People’s Choice Awards and adores Bo Brady [Peter Reckell].

#10 Roseanne Barr – General Hospital
The funny lady and judge of Last Comic Standing is a huge GH fan and the cameo role of Jennifer Smith was created for her back in the 90s – and then Luke and Laura did a cameo on her sitcom Roseanne.

#11 Patricia Heaton – The Young and the Restless
The sloppy mom from The Middle is a megafan who scheduled her college classes around the soap and set up Austin Travers (Matthew Atkinson) with a cameo on her sitcom so she could flirt him up.

#12 Mary J Blige – One Life to Live
The R&B singer has watched OLTL since she was a girl and was “beyond thrilled” to have two cameos on the show where she sang a few of her hits. She performed at Llanview’s club Capricorn both times.

#13 Rosie O’Donnell – All My Children
Rosie watched the show from the 70s all the way up until it went off the air and was a huge Erica Kane fan – she even did a cameo where she played a maid in the Chandler house and had a scene with Erica.

#14 Jesse Ventura – The Young and the Restless
The wrestler turned Minnesota governor is a huge Y&R fan and even landed a cameo which had him play himself asking Victor Newman [Eric Braeden] to be his running mate in a bid for US president.

#15 Charles Barkley – All My Children
The baller was traumatized when AMC went off the air and NBA ref Dick Bavetta said talking All My Children drama with Barkley helped ease their antipathy on the court during high-stress games.

In addition to our top 15, here’s some more famous soap fans you may not have known about…

Aretha Franklin watch Y&R and had a thing for Eric Braeden (aka Victor Newman)
Wayne Gretzky did a cameo on Y&R as a Canadian mobster back in his 20s
Carol Burnett was a big AMC fan and did a recurring cameo as Verla Grubbs
Reba McEntire is a soap addict who hosted A Daytime to Remember, a tribute show
Cary Grant was rumored to be a Days of Our Lives fan from way back in the day
Jon Bon Jovi and his 80s hair loved the soap Another World
Bette Davis turned her Oscar winning eyes on As the World Turns
Liberace, no stranger to soap-level drama himself, was a fan of Y&R
Sammy Davis Jr loved ABC soaps and did a cameo on GH and a recurring role on OLTL

Be sure to sign up for the Soap Opera Spy newsletter so you don’t miss any soap spoilers, news and gossip.

The Young and the Restless Spoilers: Hilary Knows Lily is a Threat – Jordan About To Jump