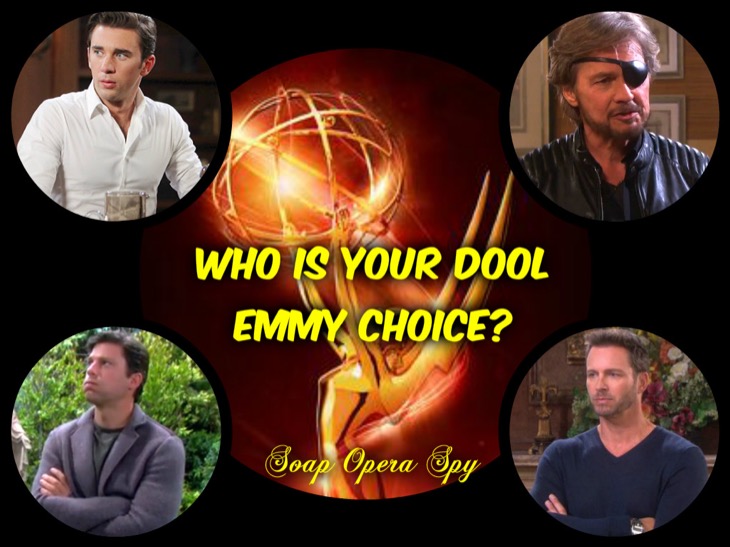 “Days of Our Lives” fans are always hopeful that their favorites will make the cut at the Daytime Emmy Awards. There are several actors who could be considered worthy of that honor. Take a look at our list of male performers who knocked it out of the park. Be sure to tell us who wowed you the most!

Billy Flynn is an obvious choice for Daytime Emmy consideration. “Days” viewers just love Flynn’s sweet portrayal. As Abigail slowly lost her mind, our hearts broke for Chad. He did everything he could to help his love. Chad’s grief over Abigail’s “death” and touching visions of Stefano (Joseph Mascolo) called for tissues, too. Flynn certainly showed us plenty of emotion in his scenes last year.

Next, we have to talk about Greg Vaughan’s role as Eric. After Eric killed Daniel (Shawn Christian), he had a hard time coping. As Eric continued to drown his sorrows, Vaughan certainly tugged at our heartstrings. Eric has made plenty of mistakes, but he has a good heart. Vaughan is a talented performer who knows how to show off the many layers of his “Days” character.

Eric Martsolf is another actor who consistently impresses DOOL watchers. When Jen Lilley wrapped up her run as Theresa, Martsolf delivered a powerful performance. Brady was torn apart by the sudden changes in Theresa. Martsolf made us feel everything Brady was going through. He gave us the perfect blend of anger, confusion, and despair.

Stephen Nichols also showed his stuff in his “Days of Our Lives” scenes. When Steve rescued Kayla (Mary Beth Evans) from Orpheus’ (George DelHoyo) clutches, Nichols portrayed a hero. However, there’s more to Steve than action and adventure. He has a sensitive side, which he often displays during tender moments with his family. Nichols nails all the right beats and is a crucial part of the cast.

Related: Who Do You Prefer Chad With Gabi or Abigail? VOTE!

There were some remarkable performances during the eligible period for the Daytime Emmys. “Days of Our Lives” fans will be rooting for their faves to score a nomination. Which actor is your top pick? Who’s truly worthy of taking home a statuette? Vote in our DOOL poll and don’t forget to check Soap Opera Spy often for the latest “Days of Our Lives” spoilers, rumors, updates, and news.

Get Exclusive DAYS OF OUR LIVES News & Updates!