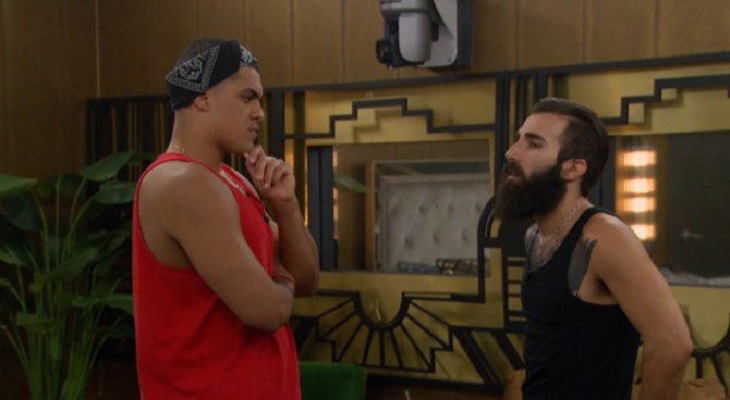 Big Brother 19 spoilers reveal that Jason Dent and Kevin Schlehuber had a chat about Paul Abrahamian’s position in the game.  Josh Martinez finally convinced Christmas Abbott that Paul might not be looking out for their best interest. Moving into another double eviction, who is in danger of going home?

To recap Week 10 so far, Christmas won the HOH competition and nominated Alex Ow and Jason for eviction. The Apple Tree came to life, and no one picked an apple. Paul won the POV and saved Alex from the chopping block. Christmas named Kevin as the replacement nominee. Jason and Kevin are the final nominees for Week 10.

Kevin and Jason chat about the eviction votes.  Kevin suggested that if the vote comes to a tie and Christmas is the deciding vote that Jason probably would go.  Jason agreed, adding that he isn’t sure how anyone is going to vote. Big Brother 19 spoilers indicate that Jason realizes that Raven Walton will probably vote him out.  She holds him responsible for Matt Cline’s eviction.

Related: Big Brother 19 Spoilers: Kevin Schlehuber Says He Is Done – Will He Self-Evict On Thursday?

Kevin has figured out Paul’s gameplay. He noted that Paul couldn’t have been surprised by Jason’s nomination as he claimed. Paul is controlling the game.  Of course, Jason has already figured this out.  In Jason’s mind, Kevin’s breakdown of Paul’s game plan is just confirmation that Paul planned his eviction.

Big Brother 19 spoilers state that Josh plans to tell Jason two hours before the LIVE show that he will be leaving today.  Jason seems to know, deep down, that he is the target.  Hopefully, he will have a chat with Alex before being evicted about Paul.  He fears that Alex will be Paul’s next target.

Christmas finally admitted to herself that Paul is not looking out for her best interest. She suggested that Josh was right about Paul. Will it be enough for Christmas to turn on Paul?  Eh, probably not.

Josh has made himself a target by challenging Paul.  BB19 spoilers state that Paul may decide to target him during the next eviction. Paul typically doesn’t like to play with people he cannot manipulate. It looks like Josh is considering making a big move. Will he target Paul next?

The double eviction could be a showdown between Paul and Josh.  Let’s just hope Josh stands up to the BB18 vet and wins the HOH competition.  Stick with Soap Opera Spy for more Big Brother 19 spoilers right here!