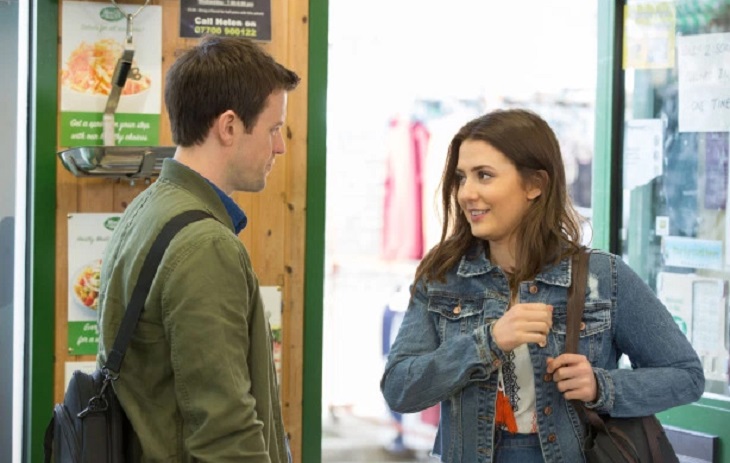 This week the most explosive scene on EastEnders had nothing to do with the chaos that erupted after a series of bombshell events shook Walford. Nope, the real scandal took place at Bex Fowler’s (Jasmine Armfield) cozy kitchen table!

EastEnders execs had long promised fans a September to remember, and they billed the week one viewing extravaganza as, “The Biggest Week Ever.” And the huge tease was spot on. So far Walford residents have been rock and rolled by a gas explosion, a shooting, and other assorted shocks. Virtually everyone was affected in some way or another by the calamitous series of unexpected events, and the aftermath is proving to be just as dangerous.

Schoolteacher Gethin Pryce (Cerith Flinn) was one of the unlucky ones caught in the gas explosion. When Bex sees what has happened to her teacher, she’s appalled and takes action to help him. Quick thinking Bex brought Mr. Pryce back to her house and lovingly tended to his injuries. But that wasn’t all that Nurse Bex got up to!

The two talked about how the explosion might have affected Louise Mitchell (Tilly Keeper), who’s already been through a traumatic year. Both Bex and Louise have been bullied, and Louise was hospitalized with horrific injuries as a result of a bullying incident at the prom.

A philosophic Bex tells Mr. Pryce that life should be lived to the fullest while one can still make the most of it. The tension began to rise as they continued their intense talk, and the uncomfortable teacher realized it was time to leave. Too late!

Before either of them could resist, Bex and her teacher were engaged in a passionate kiss. What will Sonia (Natalie Cassidy) have to say about her daughter’s latest predicament? Bex’s mom had previously spent time helping the handsome teacher move and a potential romance between the two singletons wasn’t out of the question. Fans, did we just witness the makings of a love triangle ripen between Sonia, Mr. Pryce and Bex?