“The Young and the Restless” spoilers for Monday, May 30, tease that Michael (Christian LeBlanc) will give Adam (Justin Hartley) and Chelsea (Melissa Claire Egan) some bad news. At the penthouse, Michael says there’s no evidence that Sage’s (Kelly Sullivan) journal entries were forged. Chelsea reads a copy of the portion that implicates Adam and thinks it’s rubbish.

Michael mentions that they might be able to get Constance’s (Sally Kellerman) body exhumed again for another autopsy. If Victor (Eric Braeden) made sure the results were tampered with, they might have better luck the second time around. However, a family member needs to request it. Since Constance has no living relatives, Nick (Joshua Morrow) is the next best thing as Sage’s heir. 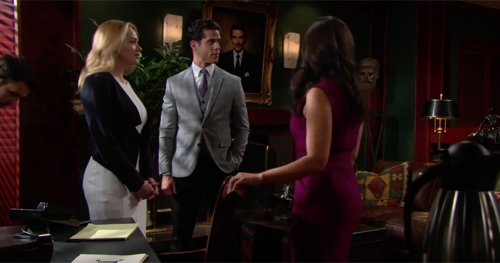 At Newman Enterprises, everyone is in crisis mode as they deal with the aftermath of the leak on the oil platform. Noah (Robert Adamson) gets updates on the situation and says they should contact Nick if Victoria (Amelia Heinle) isn’t available. Summer (Hunter King) feels like they need to handle this on their own. Luca (Miles Gaston Villanueva) echoes that idea and Noah seems miffed that he’s even involved.

Later, Luca fibs that he got in touch with Victoria and she wants Summer to talk to the press. Summer meets a reporter and announces that she’ll be speaking on Victoria’s behalf. Noah looks worried.

Meanwhile, Victoria drops Johnny off at Billy’s (Jason Thompson) place. She asks if anyone’s naked. Billy alludes to Victoria finding someone to be naked with, too. Victoria contends that she’s busy at Newman, but Billy lets her know she missed the oil spill. Word is already spreading. Victoria is shocked and rushes back to her office.

At the athletic club, Natalie (Mara McCaffray) is annoyed by Kevin’s (Greg Rikaart) preoccupation with Mariah (Camryn Grimes). Kevin insists that he just wants to help. Mariah is obviously going through something. 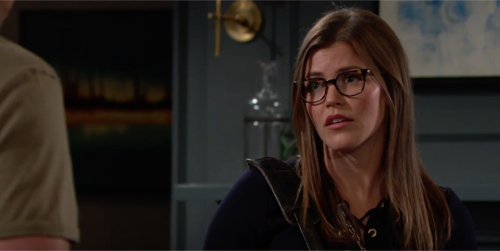 Natalie doubts that Mariah will open up anyway. She wants Kevin to hang out with her instead. Kevin notes that Natalie is his type, but he wants to be there for Mariah as a friend. Billy calls Natalie, so she heads over to his house.

At Sharon’s (Sharon Case) place, Faith (Alyvia Alyn Lind) tells Nick that he has to come see Sully. She likes the baby’s cowlick. After some comments about cowlicks sometimes being genetic, Sharon freaks. In a private conversation with Mariah, Sharon fears Nick already knows the truth. Mariah tries to calm her down and Sharon admits that she just can’t come clean. Dylan (Steve Burton) would be crushed.

Mariah agrees that she won’t say anything either. Nick comes back and wonders what they’re talking about. Faith starts rambling and Nick hints that he likes seeing Sully grow up. It makes losing Christian easier for him. After Nick leaves to see Adam, Mariah rips into Sharon for staying silent when Nick is in so much pain. Sharon shouts that she won’t lose her baby. Faith listens nearby. 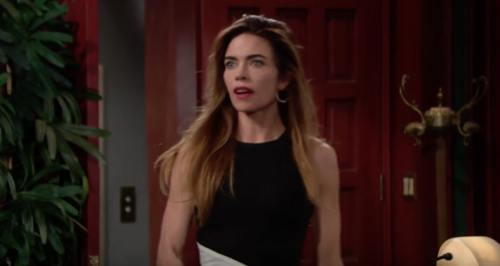 Back at Newman, Summer’s interview wraps up and Victoria bursts in. She demands to know what’s up, but Luca says they were just following orders. Victoria ponders the situation for a moment and decides to play along. She thanks Summer for helping out and speaks with Luca privately. She wants to know what he thinks he’s doing.

Luca claims that he was trying to cover for Victoria. It would look bad if anyone knew she was unavailable at a time like that. Luca insists that he wants to prove his worth. At Billy’s place, he asks Natalie for info on the oil spill. They see Summer’s interview and Billy thinks she’s part of a cover-up. 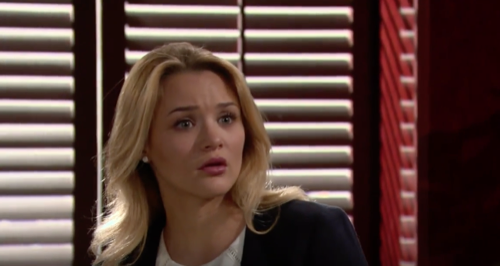 Noah comes over and Billy points out that Summer lied to the reporter. When Noah says Summer just did what Victoria told her, Billy corrects him. He says Victoria was with him when she heard about the spill. Noah is irritated that Luca is stirring up more trouble. He leaves and tracks down Summer. Noah indicates that Luca is a liar and he set Summer up.

Other “Young and the Restless” spoilers reveal that Michael will talk to Kevin about his love life. As they sit at the outdoor restaurant, Michael wants to hear about Kevin’s issues with Mariah and Natalie. Kevin fills Michael in on what happened, including Mariah’s kiss.

Michael urges Kevin to make a choice before things go any further. Kevin mulls it over and meets back up with an apologetic Natalie. Kevin states that he wants to be a couple. Natalie is pleased and they make out.

At the penthouse, Adam pleads his case to Nick. When Nick spots Adam’s copy of the journal, he flips out. He doesn’t like Sage’s private thoughts being combed through by Adam. Nick doesn’t want Sage’s memory tarnished in the midst of all this.

Adam assures Nick that he doesn’t want that either. He hopes to put everything to rest, but they need Nick’s permission to exhume Constance’s body again. Will Nick agree? There’s a good chance Nick will come around, but Y&R rumors hint that more complications are on the way. Stick with the CBS soap to see what’s next.

‘Days of Our Lives’ Spoilers Tuesday: Rafe Heart Sinks as He Spots Hope and Aiden’s Hug – Adriana Does Some Matchmaking, Calls Someone Special to Town