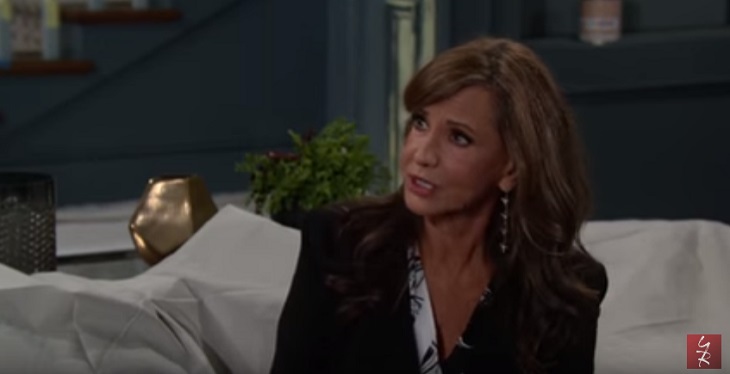 “The Young and the Restless” spoilers for Wednesday, July 27, tease that Lauren (Tracey E. Bregman) will confront Cane (Daniel Goddard) about his plans. She’ll ask why Cane didn’t tell her he was leaving her company. Cane might suggest that he didn’t want to announce anything until it was a done deal.

Of course, Cane undoubtedly felt a little awkward about it as well. Maybe he was simply putting it off. Regardless, Lauren won’t be pleased about the lack of a heads-up. Cane will try to smooth things over, but he’ll need to be careful moving forward. Y&R rumors hint that Cane’s pursuit of power could lead to some major problems in the future.

Meanwhile, Chloe (Elizabeth Hendrickson) will be surprised to see Billy (Jason Thompson) when she stops by the mansion. It seems Chloe hasn’t heard that Billy moved in. She’ll wonder what he’s doing there. Billy will be equally stunned to see Chloe. He’ll have questions about what brought Chloe back to town. People never know what to expect when Chloe blows into Genoa City.

They’ll sit down for a chat and provide updates on their lives at the moment. Chloe will be careful not to let any details slip about her partnership with Victor (Eric Braeden). That news is Chloe’s secret for now, but there’s a good chance someone will learn the truth soon. You can bet that trouble awaits.

Speaking of trouble, Phyllis (Gina Tognoni) will certainly be in a heap of it. Now that Jill (Jess Walton) knows about Phyllis and Billy’s affair, she intends on demanding some answers. “The Young and the Restless” preview video shows Jill saying, “What were you doing in my son’s bed?”

Phyllis will likely explain that her relationship with Jack (Peter Bergman) just isn’t the same. Their love has died and Billy has filled the void. Jill is sure to hurl some insults toward Phyllis, but that doesn’t change the fact that she’s fallen for Billy. Will Jill issue any threats to keep them apart? Stay tuned to see what’s next for Billy and Phyllis.