‘The Young And The Restless’ Spoilers: Phyllis Attempts To Accept Summer’s Wedding – Will ‘Suca’ Make It Down The Aisle? 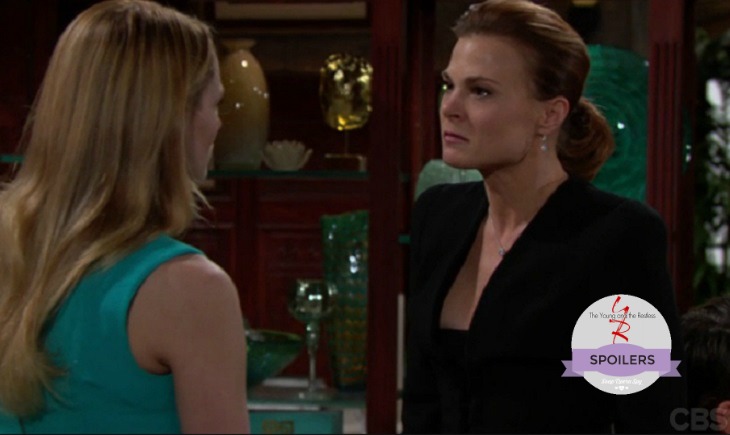 Phyllis (Gina Tognoni) did more than most reluctant mothers would on ‘The Young and the Restless’. She aggressively searched for dirt on her daughter’s fiance, Luca (Miles Gaston Villanueva) and convinced Vickie (Amelia Heinle) to see Travis (Michael Roark). But, feeling that she failed in her efforts to stop Summer’s (Hunter King) wedding, Phyllis resigned herself to the fact that not all battles are winnable, it’s the war that counts.

‘Red’ appeared to be embracing Jack’s (Peter Bergman) mellowed approach. Always a fighter inside the skin of Michelle Stafford, Tognoni’s version of Phyllis has drastically simmered down. Each actor’s efforts aren’t being belittled. Instead, various loyal viewers of ‘The Young and the Restless’ likely see what the writers are doing. It’s Phyllis 2.0, instead of a Stafford copy.

Few deny that ‘Suca’ is a bad idea. While Summer and the audience know that Luca did actually develop feelings for his fiance throughout 2016, the fictional characters in Genoa City simply don’t trust Mr. Santori. The Newman clan sees him as an opportunist who likely sabotaged their company’s oil rigs. The other half of Summer’s family believes that she hasn’t learned lessons taught through the Austin Travers (Matthew Atkinson) disaster and remains naive about the type of man who’s a true match.

Unlike many in her family, Summer is more kind-hearted. She takes after Nick (Joshua Morrow) in that regard. Because she’s attractive, Summer has had plenty of suitors. But, her challenge has always been to pick a winner, rather than someone who turns her head and talks pretty. However, many younger people across the soap world (and in the real world) have faced similar circumstances in their own lives. So, this particular character deserves the right to make her own choices, as her mother has come to conclude.

Of course, Travis might change his decision to stay aboard his boat and arrive in Wisconsin, which could conceivably affect the intended nuptials. Victor (Eric Braeden) is distracted by Adam’s (Justin Hartley) latest legal dilemma, but remains an influential wild card who could stop ‘Suca’ through some scheme. But, if all else fails, it appears as though Phyllis’ daughter will soon become a married woman.