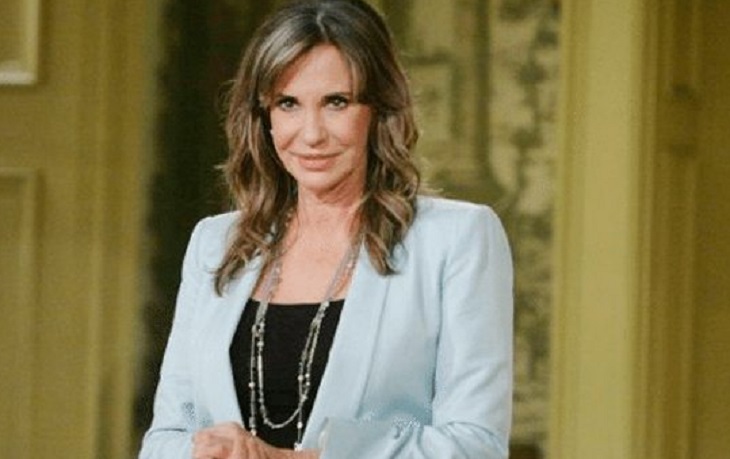 The Young and the Restless’ (Y&R) Jess Walton has portrayed Jill Abbott since 1987.  Jill has been perceived as more bad than good; and that is just the way Jess likes it!  She admits that she thoroughly enjoys working with the current actor, Jason Thompson who is playing her son, Billy Abbott.  She is not saying anything bad about the previous actors, she says Jason brings a new depth to the character that she really loves.

When Jill Abbott Atkinson returned a few weeks ago, it was like a tornado had struck Genoa City.  Her first task, of course, was to attempt to reign in her son Billy and straighten the mess he had made of his life again.  When Y&R’s Jill walked into the Chancellor mansion, she was devastated by the way Billy had destroyed it and Katherine’s memory.  She immediately started to redecorate.

Another big moment on The Young and the Restless, was when Jill discovered her son was sleeping with his brother’s wife.  Jill has not always been a saint herself, but she had no problems threatening Phyllis (Gina Tognoni) and trying to push Billy back with Victoria Newman (Amelia Heinle).

Y&R’s Jess Walton is happy that so many fans are excited at her return and she also admitted in an interview with CBS Soaps In Depth that she prefers to come back in this manner than returning like she did when Billy had his horrific accident.  She loves to be funny and bawdy over crying, and as fans, we prefer her being the comedic manipulator any day.

Jess admits although she loves the Y&R scenes where she is “beating down” Phyllis; she admits that she loves when her husband, Colin Atkinson (Tristan Rogers) is onscreen as well.  Mainly because fans need to see the softer side of her; she can’t be a bully all the time, right?  Jess agrees with Tristan, in the sense, that soap opera need to focus on the older characters and their love lives too.  Tristan has been very vocal about the fact that soap operas are not just about the teens, early 20s, and early 30s, but it’s about the entire family, including older couples.

The Young and the Restless’ fans can relax, at least for now.  Jess Walton admits that after 28 years on the show, she felt maybe it was time to end her stint on the show; especially since her family lives in Oregon.  The going back and forth was weighing on her, but she decided that she loves both too much to quit.

When in Oregon it’s more of a get-a-way, with her kids, and animals but Los Angeles is the polar opposite where its mostly all work and no play.  She is in the studio at 6:30 am until 4 pm, then when the day of taping is done, she has to study lines for the next day, sitting very much alone in her apartment.  Jess admits that it is a lot of work but she is very grateful and feels very lucky to be a part of The Young and the Restless’ family!

‘The Young and the Restless’ News: Justin Hartley Wants Eric Braeden To Join Him On ‘This Is Us’