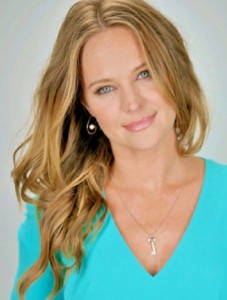 “The Young and the Restless” fans’ favorite, Sharon Case sat down with Soap Opera Digest to dish on Sharon Newman, her personal life and put Shick reunion rumors to bed. Sharon Case proves to be a charming, sweet, and candid person in her interview. She holds nothing back in this revealing interview.

Sharon Case has been a part of the show for 21 years. She is not a stranger to the daytime scene. She recalls the moment when they told her she was going BACK to Fairview. She laughed and stated, “I guess that means time off, right?” She explains that being in Fairview often means you are off canvas for a while. Case reveals that the Fairview scenes are not “fun.”

Case said that she was surprised at the amount of fans her character has right now.She noted her fans seem to stay by her side no matter what storyline is going on the show. She imagined many would not be too happy with the fact she is in possession of Sage’s [Kelly Sullivan] presumed dead baby, Christian.  Sharon said it does not seem to matter to the fans, and they have placed all the anger on the storyline towards Dr. Anderson [Elizabeth Bogush].  Sharon Case noted she is pleased portraying Sharon right now, “She’s happy, connected to her children, and an excellent mother. It’s a good look for Sharon.”

Related: In 2015 Y&R One Of The Top Searched Non-Reality Shows In Yahoo

Sharon noted that in her personal life, she was much like her character in that she has not been very successful in love. Sharon added she is in her 40s, divorced, and childless. She explains that it must be her age, but saying that doesn’t make her sad anymore. She knows the right man is out there, and until then she’s happy with her life.

Sharon knows that her fans miss her with her long-time on-screen husband and soul mate, Nick Newman [Joshua Morrow]. She explains that she misses being married to him on the show too. She noted that while there’s no Shick pairing coming, they will remain close and co-parent Faith [Alyvia Alyn Lind] in a peace way.  She explained that is progress from last year.

Related: Billy In Coma, Jill Begs Him to Wake Up – Victoria Not Sympathetic – Paul Determined To Find Driver

Sharon ended the interview explaining that if her character had her way her ex-husband and her daughter wouldn’t be connected with Sage in any way, but that isn’t the case. “They are all dealing with their circumstances the best way they can,” Sharon explained. She added, “Nick probably isn’t truly thrilled Sharon is with Dylan[Steve Burton], his brother either.”

‘The Young And The Restless’ Spoilers: Billy Abbott Near Death While Newmans And Abbotts Feud – Setting Stage For Jason Thompson’s Arrival

‘General Hospital’ News: Genie Francis Continues To Shed Pounds On Weight Loss Journey – How Does She Do It?