‘The Young And The Restless’ Spoilers: Billy Abbott Near Death While Newmans And Abbotts Feud – Setting Stage For Jason Thompson’s Arrival 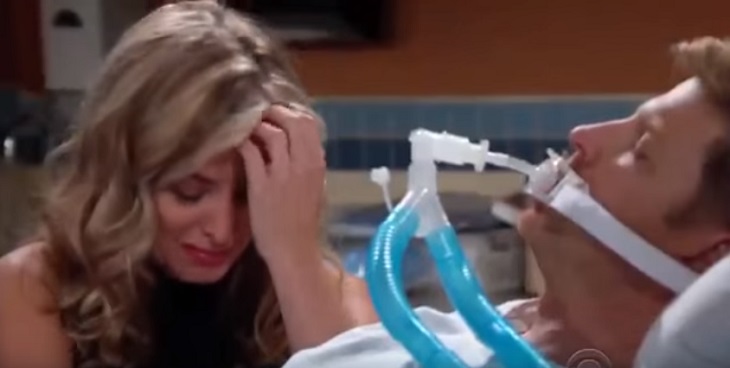 ‘The Young and The Restless’ (Y&R) spoilers reveal that Billy Abbott [Burgess Jenkins] is in dire shape and hovering near death. In coming days, it looks like he’s going to battle for his life and emerge from this medical crisis as a new man – as Jason Thompson steps into the role.

We saw that Billy took a massive beating from his bookie’s henchmen and, as if that wasn’t bad enough, Noah Newman [Robert Adamson] accidentally backed over him and then drove off. Looks like the combination of these injuries will have Billy perching perilously near death.

A new video promo released by CBS shows Jack Abbott [Peter Bergman] announce to the assembled family that Billy only has a 50/50 chance of coming out of this. Later, Billy crashes and they have to bring in the defibrillator as he flat lines.

His injuries are so extensive that Billy ends up on life support. Victoria Newman [Amelia Heinle] has to deal with immense guilt as she blames herself for sending Billy into a deepening spiral by dumping him. And she’ll also have to question whether she’ll leave Billy on life support or unplug him if things worsen.

Billy’s mom Jill Abbott [Jess Walton] shows up and is devastated to see her boy in this bad of shape. She’s also furious at those she feels treated Billy terribly and pushed him into these depths. Jill blames Jack for cutting him off and firing him from the family business.

Jill blames Victoria for kicking Billy to the curb repeatedly and she will absolutely hit the roof when Victor Newman [Eric Braeden] shows up at the hospital. Jill sees Victor as the one who pushed for Billy’s ousting from Jabot and for tormenting her son for years.

Also angry at most of those assembled is Phyllis Newman [Gina Tognoni] who agrees with Jill that Jack and Victor have been far too hard on Billy. In recent weeks, we’ve seen Phyllis as Billy’s sole champion and defender, so she and Jill are united in their concern – and their anger.

The family will be told by doctors that Billy’s condition is deteriorating as everyone shows up to hope and pray for a recovery. Ashley Abbott [Eileen Davidson] will be there at Billy’s bedside, her own medical crisis forgotten in light of this emergency.

Newlyweds Abby Newman [Melissa Ordway] and Stitch Rayburn [Sean Carrigan] will be on hand as will Chelsea Newman [Melissa Claire Egan]. Everyone is together and angsty as they wait to hear if the troubled Billy Abbott can pull through.

Related: In 2015 Y&R One Of The Top Searched Non-Reality Shows In Yahoo

As we know, Billy will make it out of the hospital in one piece, because this is the recast transition event as Burgess Jenkins leaves and Jason Thompson steps into the role. There’s lots more drama here to come as the cops investigate who was driving the car that struck Billy.

Also, do they know Billy was beaten prior to the assumed hit and run? Seems like the injuries would indicate a beating, but perhaps the trauma of being run over masked those. Will Noah face arrest for running over Billy? Will Marisa Sierras [Sofia Pernas] confess that she saw Noah driving away?

Share your thoughts below on the Billy Abbott actor change from Burgess Jenkins to Jason Thompson and stay tuned to Soap Opera Spy for more ‘The Young and The Restless’ spoilers, news and updates.