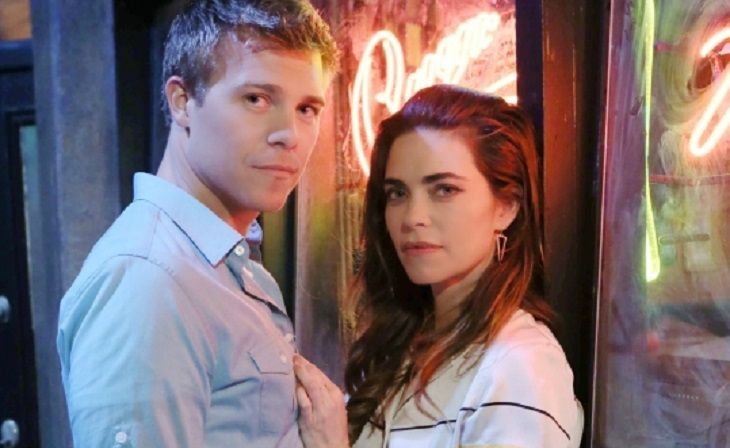 ‘The Young and the Restless’ actor Michael Roark [Travis Crawford] spoke with Michael Fairman when he visited the set during the show’s celebration of their 11, 000th episode.  During this interview Roark shared a couple things, for instance how much fun it is to work with Amelia Heinle [Victoria Newman], plus the mystery surrounding his character.

Viewers are still getting to know Travis, there is still a big mystery surrounding this fairly new character. Exactly what Travis is after is yet to be revealed, as well as his possible Genoa City connections. He was known as the owner and bartender of a bar, but later became the love interest for a very important and core character, Victoria Newman.

There is clearly more to Travis and we’re sure we will eventually be treated to the full story, in the meantime the actor shares that fans will soon get to know more about the character. When Fairman asked about Travis and if viewers know everything about him, he replied “Nope, you sure don’t, but you’re going to find out though. There’s a lot of context and a lot of subtext to Travis. He has his demons, and he’s a genuine guy in a lot of ways, but there’s other things beneath the surface. I will leave it at that. I don’t want to say too much.”

While that is that, Roark was quite happy to be asked back to work. Earlier this year he made an exit in the role but was asked to come back shortly after. “It was kind of tongue and cheek and nothing was for sure, but I kind of had an idea of how it was going down,” he says about the possibility of returning after being written off the first time.

A part from that he had quite a lot to say about what it is like working with Heinle. Here’s what he said “She’s great. I can’t say enough good things about her. She’s a lot of fun on-camera and off-camera. We have a lot of fun together. It makes it much easier to come to work.”

So there you have it fans. Are you thrilled to have him back at ‘The Young and the Restless’? Do you think Travis and Victoria are a perfect couple?