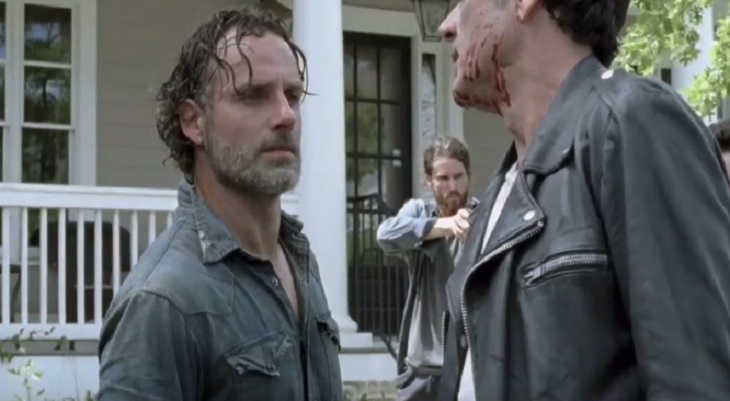 We all just witnessed on “The Walking Dead” mid-season finale that Negan (Jeffrey Dean Morgan) is back up to his wicked ways and now it appears that Rick Grimes (Andrew Lincoln) and his people are ready to take action.

Unfortunately, we will have to wait until the second half of Season 7 to pick up on February 12, 2017 to see what is going to take place.

Negan killed two more of Rick’s people and even though he and Spencer Monroe (Austin Nichols) did not see eye to eye, Rick did not take Negan’s killings lightly in his hometown.

Related: Fall Finale Spoilers: Who Will Be Negan’s Next Victim? (Photos)

Also, in the mid-season finale of The Walking Dead someone wearing distinctive boots made an appearance. So now the question is, who is this person? The person appears to be keeping an eye on the group from Alexandria.

There are plenty of groups circulating in season 7, but one that has yet to be televised called “The Whisperers.” So could it be someone from that group or maybe even someone from “Oceanside” checking up on Alexandria to see if they pose any real threat since Tara (Alanna Masterson) escaped.

Spoilers tease that in episode 9 of “The Walking Dead” we will see Rick Grimes and his crew rising up and ready to take back what is rightfully theirs. Rick Grimes will go to King Ezekiel (Khary Payton) asking him for help.  Hopefully, he will decide to help him and his crew take down Negan.

Related: ‘The Walking Dead’ Puzzle Challenge: Will Daryl Get Away From Negan?

“The Walking Dead” Season 7 returns with episode 9 on February 12, 2017. So make sure to tune in and see what the future holds for Negan. Don’t forget to check often with Soap Opera Spy for all your latest Walking Dead spoilers, news, updates, and much more.

‘The Bold and The Beautiful’ RUMOR: Eric Is Going On A Revenge Streak