‘The Walking Dead’ News: Norman Reedus Reveals What Daryl Was Originally Supposed To Ride On TWD 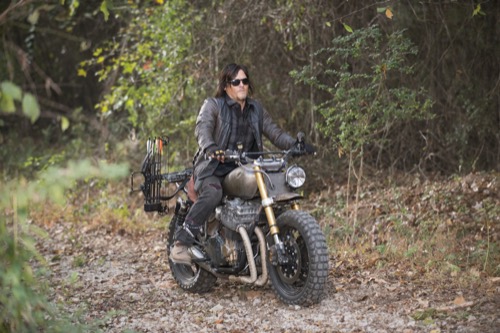 In the opening premiere of Season 1 of ‘The Walking Dead’, Daryl Dixon (Norman Reedus) was supposed to be riding a horse per the original script. Norman Reedus revealed on an appearance on TBS’ “Conan” that his character, Daryl, was supposed to ride a horse instead of a motorcycle on ‘The Walking Dead’ series. During the interview with Conan O’Brien, Reedus commented, “I saw it written and I’m kind of afraid of horses, with their big eyeballs and they can smell your fear and all that stuff.”

Norman Reedus went on to explain that he had done a movie with Robert Redford called ‘The Conspirator’ in 2010 with a scene with him riding a horse, the horse apparently had his own agenda. Norman recalled, “It looked like I knew what I was doing and about two seconds into it the horse would just start to like trot backward and get in single file with the other horses. And I could hear Redford screaming, ‘Someone handle Norman’s horse!’ And I was like, ‘Man, I’m gonna get fired off this job.’”

You Might Also Like —> ‘The Walking Dead’ Attraction To Live At Universal Year-Round, Opens July 4 – Details HERE!

“And I thought the same thing when I read that in ‘The Walking Dead’ script,” Reedus continued. “I was like, ‘Well, whose motorcycle is that?’ And they’re like, ‘It’s your brother Merle’s (Michael Rooker). I’m like, ‘Well you know, if Merle could ride a motorcycle , Daryl probably knows how to ride a motorcycle’ I spun it into that.”

Norman Reedus defines the character of Daryl, and it started right in the very first episode of season 1 of ‘The Walking Dead’. How do you think Daryl’s character would have evolved over the past seasons if he had followed script right in the very beginning by using an unstable horse as his means of transportation. Would Daryl be as popular as he is now if he was a cowboy instead of biker?! Let us know what you think in the comment section below.