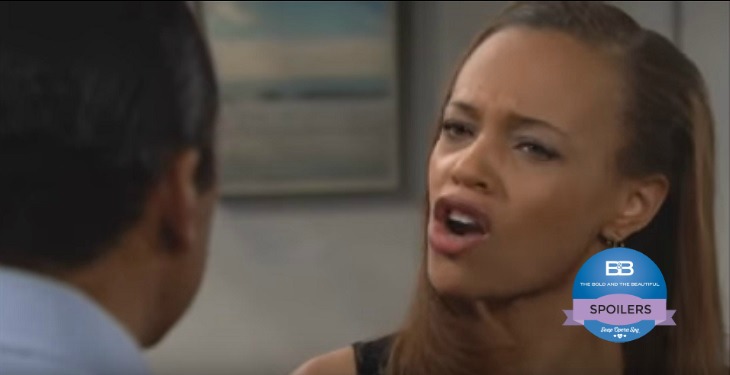 “The Bold and the Beautiful” spoilers for Tuesday, May 3, tease that Julius (Obba Babatunde) will attempt to deny Nicole’s (Reign Edwards) accusations. Now that Nicole knows Sasha (Felisha Cooper) is her sister, she’ll demand some answers from her father. Nicole is beyond angry about the way Sasha has been treated.

When Julius suggests that Sasha is a liar, Nicole will side with her sis. She knows this is Julius’ style. If he doesn’t like something, he sweeps it under the rug. Nicole will be livid over Julius’ refusal to recognize a child he helped bring into this world. She’ll worry about the toll it’s taken on Sasha as well as what this news could do to Vivienne (Anna Maria Horsford).

Meanwhile, Sasha will believe she’s ruined everything. Julius expected Sasha to keep the secret, but everyone should know the truth soon enough. Sasha will fear that her sudden confession could destroy the entire Avant family. She’ll feel terrible if everything falls apart because she blabbed.

Zende (Rome Flynn) will be stunned once Sasha declares that Julius is her father. She’ll try to explain the complex relationship she has with her dad. “The Bold and the Beautiful” spoilers indicate that Sasha will discuss the woes of her childhood. She’ll want Zende to understand the struggles that have brought her to this point.

Zende will be sympathetic to the difficulties Sasha has faced in the past. However, he won’t want Sasha to fret over the future. Zende will maintain that he’ll be there for Sasha, even if Julius won’t.

Of course, this bombshell is undoubtedly going to shake things up for the Avant family. It also changes the love triangle for Zende, Nicole and Sasha. Now that Sasha and Nicole know they’re sisters, it may be a little tougher to engage in a cutthroat battle over Zende.

Still, there’s no denying that they want the same man. B&B rumors hint that this situation could get quite complicated in the coming weeks. Stick with “The Bold and the Beautiful” for updates on the big decisions headed Zende’s way.

So B&B fans, what do you think about Julius and Nicole’s showdown over Sasha? Will Nicole force her father to admit the truth? Will Zende grow closer to Sasha after she opens up? What does the future hold for this pairing? Voice your opinion in the comments below and don’t forget to check Soap Opera Spy often for the latest “Bold and the Beautiful” spoilers, rumors, updates and news.