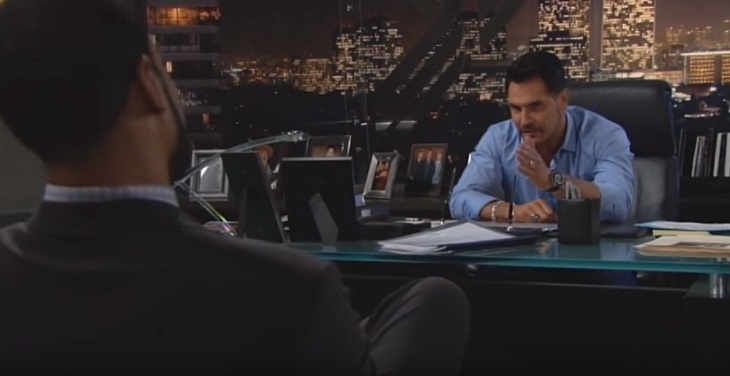 “The Bold and the Beautiful” spoilers for Tuesday, April 26, tease that Bill’s (Don Diamont) chat with Deacon (Sean Kanan) will make him even more determined to bring Quinn (Rena Sofer) to justice. Bill will inform Justin (Aaron D. Spears) that he’s not going to let Quinn’s legacy be the destruction of his family. Unfortunately, it may already be too late.

Liam (Scott Clifton) has made it clear that he intends on winning back Steffy (Jacqueline MacInnes Wood). If Wyatt (Darin Brooks) doesn’t like it, then tough cookies. Liam will declare that he got robbed and Steffy belongs with him. “The Bold and the Beautiful” spoilers say Liam will plan a romantic night for Steffy in hopes that she’ll agree.

Once Steffy shows up, Liam will try explain how much she means to him. He’ll insist that Steffy and the memories they’ve shared are what brought him back. Liam will believe there was always a strong pull toward Steffy, even when he couldn’t quite put his finger on it. Now Liam remembers his love for Steffy and all he wants is to be with her.

However, things won’t be as simple for Steffy. “The Bold and the Beautiful” spoilers reveal that Steffy will feel drawn to Liam, but she’ll be hesitant to give up on her marriage. She’ll point out that Liam was gone and Wyatt stepped up when she needed him.

Liam won’t buy that this is the end of their relationship. They’ve been through so much together and Liam isn’t willing to let Steffy go without a fight. He’ll be convinced that Steffy still loves him deep down. It’s undoubtedly true, but that’s not really the issue here. It’s Steffy’s feelings for Wyatt that present a problem.

Related: Quinn Returns For Liam – Will Adam Call The Cops On His Eve?

Steffy doesn’t want to hurt Liam or Wyatt, but she’ll have to make a decision eventually. Will Steffy return to her old love or stand by her new husband? We’ll have to wait and see, but B&B rumors hint that Steffy may continue to long for Liam. Stick with the CBS soap to see if there’s another chapter left in Liam and Steffy’s love story.

So B&B fans, what do you think about the news that Bill will rev up his efforts to find Quinn? Will Liam persuade Steffy to make some updates to her love life? Will Steffy break Wyatt’s heart later on? Voice your opinion in the comments below and don’t forget to check Soap Opera Spy often for the latest “Bold and the Beautiful” spoilers, rumors, updates and news.

The Bold and the Beautiful Spoilers: Brooke and Quinn Both Lay Claim to Forrester…