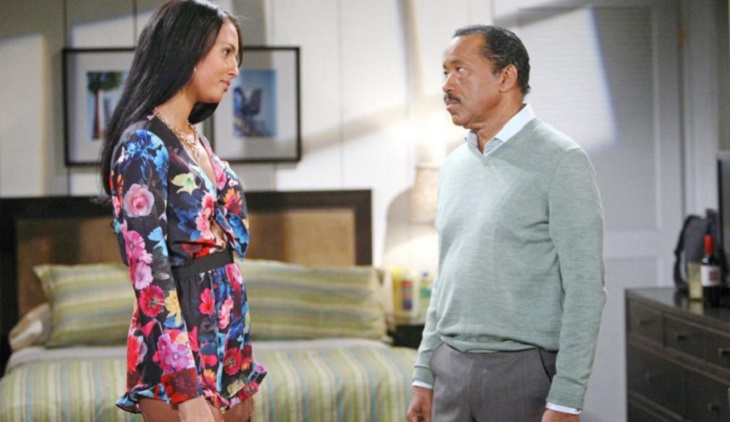 Sasha (Felisha Cooper) has been a fire ball ever since arriving at the Avant’s home to see her childhood best friend Nicole (Reign Edwards) and her parents. Felisha Cooper deuted in the role of Sasha on ‘The Bold and the Beautiful’ in December 2015, and brought so much fierceness to the table. Sasha currently holds a major secret that could completely tear the Avant family apart.

Back in the day, Julius (Obba Babatunde) had an affair with Sasha’s mom, leading to her birth. The Avant family is unaware of this affair and also of the fact that Sasha is Julius’ child. What will Nicole and Maya (Karla Mosley) think of this when they learn that Sasha is actually their sister?

In an article from this week’s SID magazine, Cooper discusses how “Sasha is a ticking time bomb!” According to Cooper, “Julius has wronged her so much, so why would she keep that a secret?” The actress believes her character keeps the DNA secret because deep down inside she loves her father, despite how much their relationship has been strained in the past. Sasha may be keeping the secret in hopes that one day daddy dearest will have a change of heart and finally love her.  But, considering how Julius has treated her since she arrived in LA – he really hasn’t given his secret daughter a reason to remain loyal.

Sasha is not one known to keep her mouth shut about anything. And, ever since feeling betrayed by her own best friend Nicole, she feels she has no need to be loyal to her anymore. Sasha went as far as to try to seduce Nicole’s now ex-boyfriend Zende (Rome Flynn). Her efforts eventually paid off when Zende finally stopped refusing to heed to temptation and slept with her. With all the buildup of hate between Sasha and Nicole we can’t help but wonder if she will blast this secret just to hurt Nicole – despite the fact that Julius may never speak to her again.

Do you think Sasha will spill the beans and tell the world that Julius Avant is her father?  Share your thoughts in the comments below!

The Bold and the Beautiful Spoilers Friday, January 24: Thomas Warns Steffy to…

The Bold and the Beautiful Spoilers: Shauna Misguided By Quinn – Is She In…