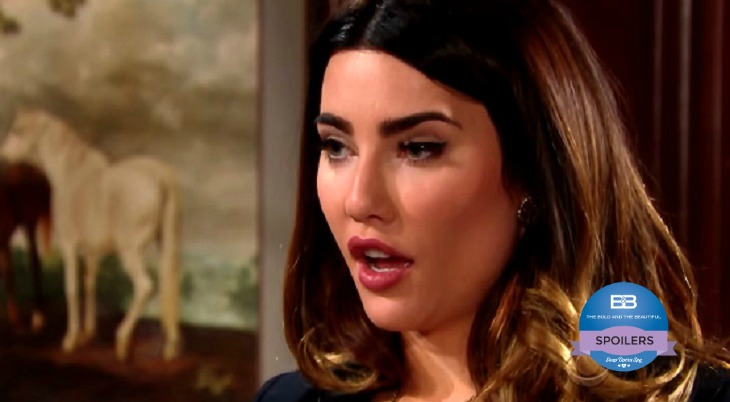 ‘The Bold and The Beautiful’ (B&B) spoilers for hot summer action tease that three love triangles will sizzle, secrets will explode, a new marriage may fizzle out, and Douglas’ paternity secret may fuel a coup at Forrester Creations.

The problem is, if Zende does what Nicole wants and stays away from Sasha, he’ll miss out on a great chance to advance his career. What will Zende do? And how long can Sasha fend off demands that she tinkle on a stick so her sisters will know if she’s lying or not?

Related: Thomas And Ridge Face Off Over Douglas – Ridge Refuses To Let Him See Baby

We knew the Douglas paternity secret would not stay hidden forever, but it looks like it won’t even last out the month of June. Bill Spencer [Don Diamont] ferrets out the secret and it looks like Katie Logan’s [Heather Tom] loose lips is how Dollar Bill found out.

Of course, Bill will be thrilled to find out Ridge Forrester [Thorsten Kaye] is shooting blanks and that he’s passing off his grandkid as his kid. But Katie feels bad that she blabbed the news and begs Bill to keep it secret. He says he will but he totally won’t.

Bill is pondering a takeover attempt of Forrester Creations because he’s worried about his investment and he may end up with some very interesting allies in the effort. Rick Forrester [Jacob Young] would make a deal with the devil to oust his brother, so a Bill-Rick alliance could work.

Related: Thomas’ Dilemma – Will He Choose Forrester Creations Shanghai Or Claim Douglas As His Son

Also, Ridge is trying to send Thomas Forrester [Pierson Fodé] to China and he’s furious that his dad is obviously trying to cut him out of his son’s life. Will Thomas also jump on the mutiny bandwagon and try to get his dad out of the CEO chair in revenge for this poor treatment?

There is also trouble ahead for the newly minted marriage of Wyatt Spencer [Darin Brooks] and Steffy Forrester [Jacqueline MacInnes Wood] on two fronts. First is that their marriage may not be legally binding. Was Wyatt’s divorce from Hope Logan [Kim Matula] less than kosher?

Wyatt enlists his dad Bill to help him sort out the legalities while Steffy becomes increasingly annoyed that Quinn Fuller [Rena Sofer], free from facing charges, keeps lurking around trying to spend time with Wyatt. Will Wyatt choose Steffy over his mother and tell Quinn to get lost?

Steffy can’t stop thinking about Liam Spencer [Scott Clifton] and neither can Quinn while Liam clearly still wants Steffy but also has Quinn on his mind given all the intimacies they shared at the cabin. B&B spoilers tease that Steffy is heading for a breaking point over their love triangle.

Katie will keep boozing as summer heats up and her behavior will cause Bill to wonder if she’s a fit mother. With Brooke Logan [Katherine Kelly Lang] always around, Bill will be tempted by the saner sister and this triangle will also intensify in coming weeks.

What do you think B&B fans? Do you think Steffy will stick with Wyatt? Are Bill and Katie doomed? Will Bill be able to topple Ridge from his Forrester Creations throne? Share your comments below and tune in to Soap Opera Spy every day for more ‘The Bold and The Beautiful’ spoilers and news.