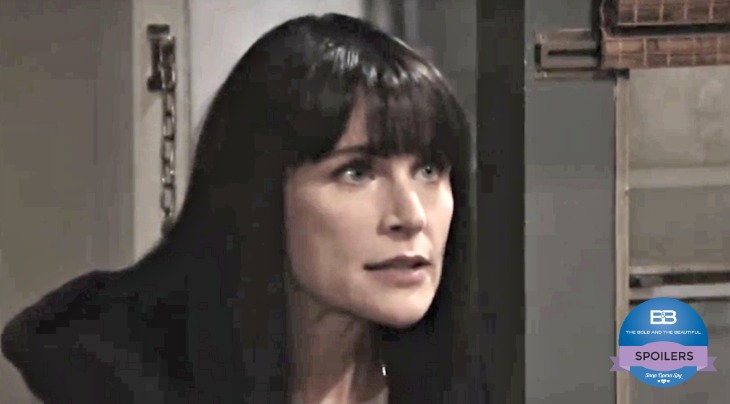 “The Bold and the Beautiful” spoilers for Wednesday, June 8, tease that Quinn (Rena Sofer) will be back to her old tricks. As Quinn considers Liam’s (Scott Clifton) pursuit of Steffy (Jacqueline MacInnes Wood), her rage will begin to build. Quinn will refuse to let Liam interfere with Wyatt (Darin Brooks) and Steffy’s relationship. She’ll believe Liam is putting Wyatt’s happiness in jeopardy and she just won’t stand for that.

Once Quinn mulls all of this over, she’ll realize what she has to do. “The Bold and the Beautiful” spoilers say Quinn will be willing to take drastic action against Liam. Wednesday’s preview video shows Quinn snarling, “As long as Liam lives and breathes, he’s a threat to my son’s marriage.” Whoa! Quinn clearly decided to drop the nice act.

Quinn has done nothing but profess her love for Liam lately, but she’s starting to shift gears. Liam may wish he’d just hopped back in bed with Quinn by the time she gets through with him. B&B rumors hint that Quinn’s new scheme could bring several curveballs for Liam over the next few weeks.

Elsewhere, Wyatt will bicker with Steffy about Quinn. Steffy will maintain that they need to break free. Quinn brings nothing but drama to their lives. Wyatt will remind Steffy that Quinn is his mother. He cares about Quinn and he can’t shut her out.

Meanwhile, Ridge (Thorsten Kaye) will try to talk his way out of a tricky situation. He’s got a real mess on his hands. Bill (Don Diamont) came in the Forrester mansion with guns blazing. He’s on a mission to stop Ridge’s manipulation tactics. Bill will insist that Ridge may bully everyone else, but he’s not going to do it to Caroline (Linsey Godfrey).

Ridge will understand that Bill means business. “The Bold and the Beautiful” spoilers indicate that Ridge will propose a deal. He’ll hope they can reach an agreement that will keep both sides of this fight satisfied. Ridge will offer up some of his power in an effort to regain control of the paternity secret. Will Bill accept his proposal? Stick with the CBS soap for updates on Ridge’s attempt to sort everything out.

So B&B fans, what do you think about the news that Quinn will stir up trouble once again? Will Quinn go too far? What about Ridge’s dilemma? How long can he keep Bill at bay? Voice your opinion in the comments below and don’t forget to check Soap Opera Spy often for the latest “Bold and the Beautiful” spoilers, rumors, updates and news.