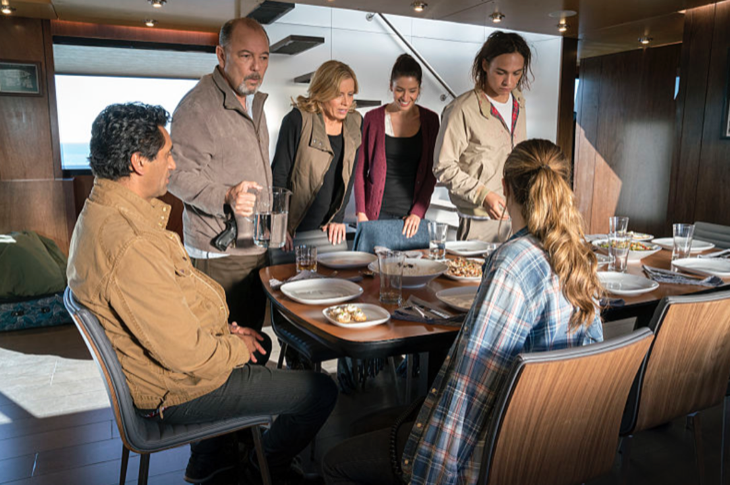 The first half of Season 2 on “Fear the Walking Dead” (FTWD) has come to a close, and it has brought more questions than answers. The show runners have stated that the second half of the season will move much faster and bring more excitement that ever before. Before the series returns in August, we have 5 question we think needs to be answered in the Mid-Season premiere.

Abigail’s mansion was engulfed in flames at the end of the Midseason finale, and Nick (Frank Dillane) chose to separate from the group and head straight toward the dead instead of returning to the boat with his family and loved ones. With no one by his side, how will he survive? Will he choose to run to the ship to be with those who can protect him?

Madison (Kim Dickens), Alicia (Alycia Debnam-Carey), Ofelia (Mercedes Mason), and Strand (Colman Domingo) were making their way to the boat when the show cut on the finale. It never showed if they made it safely or not. Is it possible they will run into trouble? Will they face some type of danger on the way?

Travis (Cliff Curtis) had to make the difficult choice to see his son, Chris (Lorenzo James Henrie) for the broke person he is and makes a sacrifice to fix him. Nick found them, and begged Travis to come to the mansion with the family, but he refused. Travis realized that Chris needs to be away from the Clark family to get better, and worries that he is a dangerous person. He voiced concerns that Chris scared him, and he was “apprehensive” he’d try to hurt Madison. Will the distance from the family make Chris better—or will the distance cause him to get worse?

Daniel (Rueben Blades) had a couple of crazy dreams in the Mid-Season finale, and those visions led him to set the mansion on fire. Many viewers thought he died in the fire after seeing his dead wife engulfed in the blaze, but the showrunners teased that he may return in fixture episodes. How will they explain his bizarre disappearance from the show?