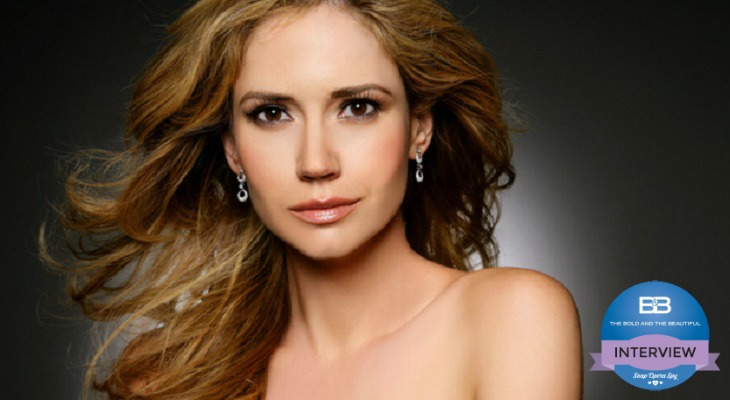 “The Bold and the Beautiful” alum Ashley Jones [ex-Bridget Forrester] is bursting with happiness. Ashley is engaged! Fiancé Joel Henricks has a three-year-old son, which means Ashley gets to be a Bonus Mom.

Ashley and Joel haven’t set a wedding date yet – first they need to work on combining their households. Jones explained in a recent interview with CBS Soaps in Depth, “I’m just not thinking about flowers, dress, and invitations.” Wedding planning can be quite overwhelming – maybe Ashley and Joel will surprise everyone and elope!

Related: Jacob Young Dishes On Living In Northern Utah And Being a Dad

Boundaries are important in Ashley’s relationship with Joel’s three-year-old son Huck. Ashley told CBS Soaps in Depth, “I’m being really careful about not trying to take Huck’s mother’s place.” Of course Ashley does need to perform a few motherly duties, and that’s to be expected. Jones gets Huck ready for school, reads to him and she’s turning into quite the Saturday Soccer Mom.

As if Ashley Jones weren’t busy enough merging households and getting to know her fiancé’s son, the actress is working on the movie “Good After Bad” from director Anne-Marie Hess. The film stars Craig Stark [Kent, “Nashville”] as Carl, Billy Burke [Miles Matheson, “Revolution”] as Wes, and Melora Walters [Wanda Henrickson, “Big Love”] as Victoria. The film’s plot involves a girl who runs away from home and is helped by Billy’s character. Ashley portrays Burke’s love interest.

Related: Brooke And Bill Share Hot Kiss At Work – Will Katie Catch Them?

An engagement, a wedding, a new movie and a soon-to-be stepson! Ashley Jones is headed for a big 2016! Even with all that Ashley revealed she is always open to a return to “The Bold and the Beautiful” as Bridget Forrester.