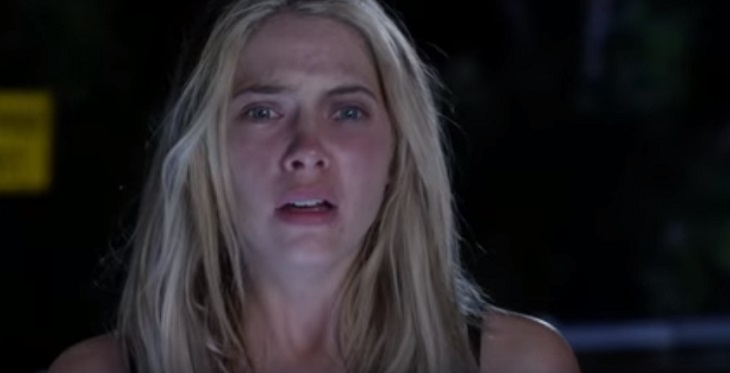 ‘Pretty Little Liars‘ 2016 spoilers tease that Season 7 Episode 2 will air on Tuesday June 28 on Freeform.  The all new ‘PLL’ episode, titled “Bedlam,” looks like it will be packed full of must-see drama and twists and turns.  Judging from ‘Pretty Little Liars’ spoilers in the Episode 7 promo video, ‘PLL’ fans are in for a treat!

The Episode 7 spoiler video for “Bedlam” kicks off with Hanna Marin (Ashley Benson) in the car with Mary Drake.  We’re a little baffled as to why Hanna would hop in to a car with a woman that looks like Alison DiLaurentis’ dead mother.  But, hey, Hanna was running for her life and beggers can’t be choosers when someone shows up to the rescue.  The real question is, is Mary Drake kidnapping Hanna all over again or will she take her back to the liars?

Meanwhile, ‘Pretty Little Liars‘ 2016 spoilers tease that things are only going to get worse for Alison DiLaurentis (Sasha Pieterse).  Poor Ali is still being heavily drugged by her shady hubby Elliot.  And, it looks like she tries to tell Emily (Shay Mitchell) what is going on, but her pleas fall upon deaf ears.  In the Episode 7 promo video, it looks like Mary Drake pays Alison a visit in the hospital.  Naturally Alison thinks she is seeing things again and her Aunt is actually her dead mother.

In other ‘Pretty Little Liars’ news, it looks like Spencer Hasting (Troian Belisario) and Caleb Rivers (Tyler Blackburn) have a chat about their relationship.  Is the new couple breaking up already?  After all, it seems safe to say Caleb’s heart is still with Hanna.  On the bright side, Ezria fans will be thrilled to see that in the all new episode of “PLL,” Aria (Lucy Hale) and Ezra (Ian Harding) seem to be in a good place.

So fans, are you as excited as we are for an all new episode of ‘Pretty Little Liars?’  Do you think that Mary Drake is Uber A?  Or is she just a red herring?  Will she help rescue Hanna, or is Hanna in even more danger?  Is this the end of Caleb and Spencer?  Let us know what you think in the comments below and don’t forget to check Soap Opera Spy for all of your ‘Pretty Little Liars’ spoilers and news!

‘The Young And The Restless’ Spoilers: Victor Moves Forward With Payback Against Adam – Will He Stop At Nothing And Destroy His Son?

‘Days Of Our Lives’ Spoilers: Kate And Andre Join Forces – Just Friends Or Something More?