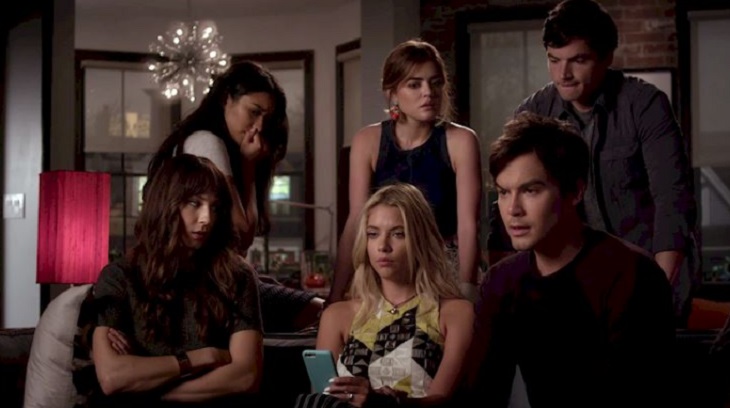 ‘Pretty Little Liars‘ spoilers tease that Season 7 of the popular drama will premiere on Freeform tonight, June 21 2016.  ‘PLL’ fans have been counting down the days, hours, and minutes until the ‘PLL‘ Season 7 premiere – but now that it is finally here, it’s a little bitter sweet.  Will this be the final summer premiere of ‘Pretty Little Liars?‘  Rumor has it, Season 7 of ‘PLL’ will be the last season of ‘PLL.’

While no one from Freeform or the ‘Pretty Little Liars’ gang has actually come right out and said it, the “end” of ‘PLL‘ has been looming ahead for a few seasons.  Let’s be honest, there can only be so many unsolved murders and cyber stalkers in one town before it becomes a bit redundant.  And, at this stage in the game, the writers are trying so hard to surprise ‘PLL’ fans – that some of their storylines and “answers” are becoming a bit over the top.

The end of ‘Pretty Little Liars‘ hasn’t been officially confirmed by anyone – but word on the internet, and on IMDB, is that this will be the final season.  Plus, Lucy Hale all but confirmed it in a cryptic interview after the Season 6 finale – but then showrunner Marlene King tried to downplay Lucy’s statements and state that she was misunderstood.  Also the fact that Season 7 has been dubbed the “Season of Homecomings” and has a ton of fan favorites returning for a last hurrah gives it a bit of a final feeling.  In all fairness, the ‘PLL’ cast members have put in seven seasons of their lives.  Shay Mitchell, Ashley Benson, Troian Bellisario, and Lucy Hale are ready to move on and join new and exciting projects.

What do you think ‘PLL‘ fans, is Season 7 the end of ‘Pretty Little Liars?’  Share your thoughts in the comments below!

‘The Bold and the Beautiful’ Spoilers Wednesday June 22: Rick Interrupts Brooke And Bill Hook-Up – Liam and Steffy Fight Over Her Feelings for Wyatt