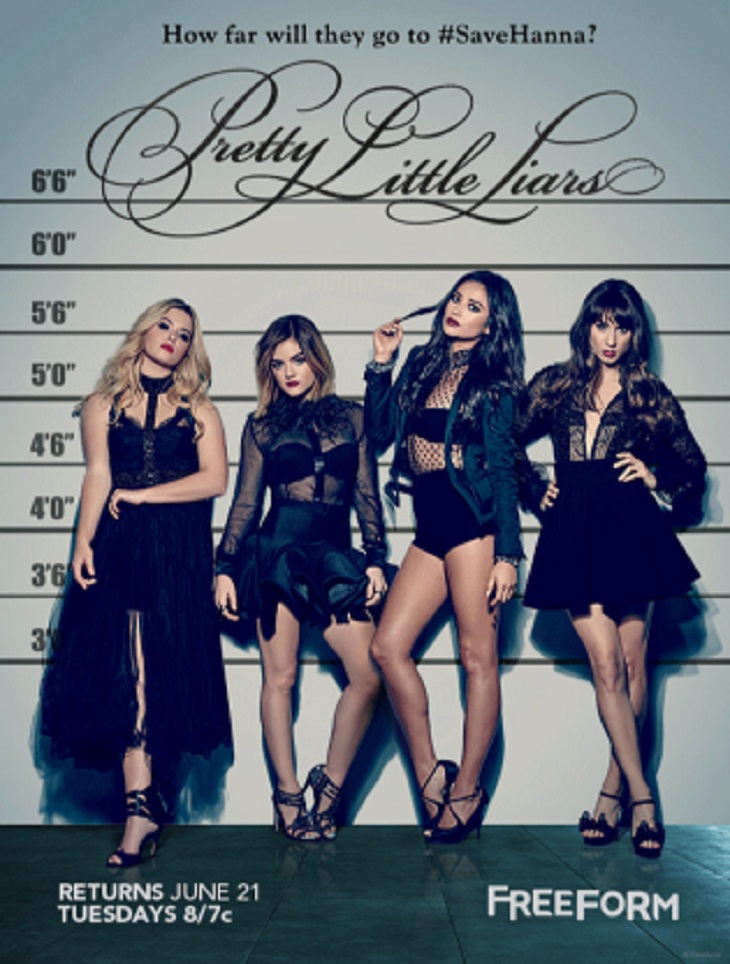 By now you’d think we’d be used to seeing the Pretty Little Liars (PLL) in a police lineup, but this time, something stands out right away. Freeform released the official poster for Season 7 which finds Aria (Lucy Hale), Alison (Sasha Pieterse), Emily (Shay Mitchell), and Spencer (Troian Bellisario) showing off their pretty little faces for a Rosewood Police Department lineup. The girls seemed to be dressed in clothes they may wear to a funeral, dressed in ALL black.

The most noticeable detail about the poster is Ashley Benson doesn’t appear.  So, what does Hanna’s absence mean for the season premiere?  The caption on the poster says, “How far will they go to #saveHanna?”  On the Season 6 finale, Hanna was kidnapped. It had been rumored that much of the first part of the season will be the liars looking for her, and doing everything to rescue their friend.

Rumors have been floating around that Ashley Benson’s character Hanna Marin may be killed off … and although they seemed absurd, this all new Pretty Little Liars spoilers poster definitely is raising a few eyebrows.

Season 7 has been described as the most romantic season to date. In addition to the romance aspect of the season, it looks like several of the liars will be pushed beyond their limits when they are forced to dig a hole in the woods as Spencer whispers something about a “murder.”

In the recent weeks, TV Line reported that Rosewood will welcome some old faces back to the show. Jenna (Tammin Sursok) and Noel (Brant Daugherty) will return to the show for the first time in several seasons.

What happened to Hanna and will they be able to save her? What do you think will happen to the Liars this season? How will the show wrap up since many fans believe this could be the LAST season to air?