General Hospital Tribute: The Amazing Rebecca Herbst – A Look Back at 20 Years of Liz 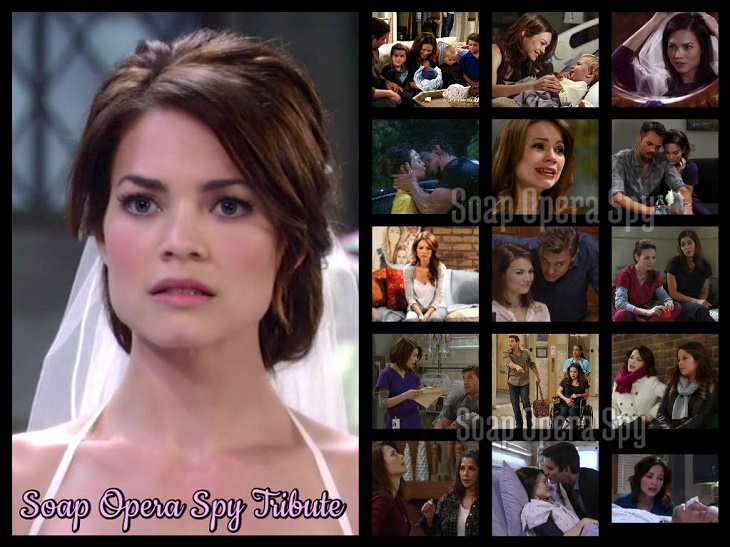 ‘General Hospital’ (GH) news and spoilers indicate that GH showrunners are in contract negotiations with Rebecca Herbst and that the talks have hit a speed bump. It would be a shame for GH to lose a talent like Herbst, who has turned out remarkable work every year of her almost two decades on GH.

Here’s a look back at some of her best work and obstacles she’s overcome over the years to make Elizabeth Webber one of the core characters in Port Charles and in our hearts.

Liz and Teen Rape – When we first met Liz, she was a teen who daydreamed about boys and envied her beautiful older sister Sarah. Then a brutal rape changed her life forever. This was bold work for a soap that had minimized the impact of rape in the Luke-Laura storyline. Her torment as a rape victim and the ensuing aftermath was gut-wrenching work as she dealt with the emotional fallout.

Liz and Lucky – As a teen, Liz crushed hard on Lucky Spencer [Jonathan Jackson] even though he had the hots for Sarah Webber, who was not interested. In the aftermath of Liz’s rape, they fell in love and it was sweet and genuine. Her anguish when Lucky was assumed dead was riveting. Herbst can do emotional pain like few other actresses. Their on and off love has always been fine work by Herbst and Jackson.

Liz and Jason – This has been the second most pivotal relationship in Liz’s life after Lucky. Jason was the ultimate bad boy that she befriended when she was young and then fell in love with later. They share a son and a twisted triangle with Sam Morgan [Kelly Monaco] and Herbst’s work with both Steve Burton and Billy Miller as Jason has been stand out and their chemistry has been captivating.

Liz and Nikolas – Loving your man’s brother is never good and when Liz fell for Nikolas Cassadine [Tyler Christopher] that set off a chain of painful events including Lucky’s drinking binge and Liz pondering suicide on the roof of GH when she finds out she’s pregnant with no clue who’s the father. Lucky talked her down but her fragile emotional state was palpable and well-played.

Liz and Shadybrook – Soap actors often play crazy as over the top, but Herbst turned in a nuanced and convincing performance with Liz’s breakdown and stay at Shadybrook. There were many complications there including Helena Cassadine [Constance Towers] trying to steal her baby and friction with Nikolas and Lucky, but Liz recovered and we got to see her struggles as she worked through it all.

Liz and Jake – When Liz lost little Jake the first time in the hit and run, Herbst finely portrayed a grieving mother who had to contend with the loss of a child and wrestle with doing the right thing in donating his organs to save the child of a woman who hated her. Herbst does grief so well and now she’s doing it again as Jake is once again in crisis after a car accident. She can move you to tears easily.

Liz and Sam – These two women have done each other dirty too many times to count when it came to both Jason and Lucky. Their scheming has always been entertaining and well done, but now, as Liz finally comes to realize that Jason is meant to be with Sam after the recent event of her house burning, Liz’s pain is profound and she realizes she has to give up on Jason. Herbst is playing this like Shakespeare.

There’s so much more to consider than just these highlights. The fact is, Rebecca Herbst has done stand-out work from the first day she walked onto the GH set. She survived Jill Farren Phelps’ attempts to destroy Liz’s character that Herbst had worked so hard to build and now Herbst is back in the same situation 15 years later with stalled contract talks.

What’s also of interest is that Herbst has weathered years of GH fans crossing the line and criticizing her as an actress for the actions of her character. That’s how convincing of an actress she is – fan outrage spills over onto her personally because she’s so invested in the character that many fans seem unable to differentiate between Herbst as a person and Liz as a character.

And when the now-ousted Ron Carlivati took Liz in a different direction with the big Jake Doe lie, Herbst did not like it at all but, like a dedicated team player, did the best job possible and played Liz as the ultimate deceiver and destroyer of families. This character shift led to even more fan hatred and earned her character the vile nickname “Lizard” and a host of criticism.

All the fan hatred of Liz’s character proves just why showrunners should renew Herbst’s contract, no matter what it costs them. She’s utterly convincing in the role and whether you love Liz or hate Liz, you always want to watch her. There’s great potential right now for the character as Liz is relinquishing her claim on Jason and facing the retribution for her year of lies.

But we worry that showrunners are not setting up Liz for redemption but tying up all the loose ends so they can make a next character exit if they decide not to renew with Herbst. With GH ratings always a concern, can the show survive losing such a strong actress and pivotal character? Maybe not. General Hospital will be lesser for losing Herbst so let’s hope it doesn’t happen.

What do you think GH fans? Love or hate Liz, don’t you agree that Rebecca Herbst is an exceptional actress? Would you like to see her contract renewed and the show take her in a new direction like love with Nikolas or Dr Munro? Share your comments below and come back to Soap Opera Spy often for more ‘General Hospital’ spoilers and news.

‘Days Of Our Lives’ Poll: Which Hope Brady Romance Was Your Favorite? Vote!

‘The Bold And The Beautiful’ News: Sean Kanan Exclusively Dishes On His Movie Career – Free Screening Of ‘South 32’ Coming Up