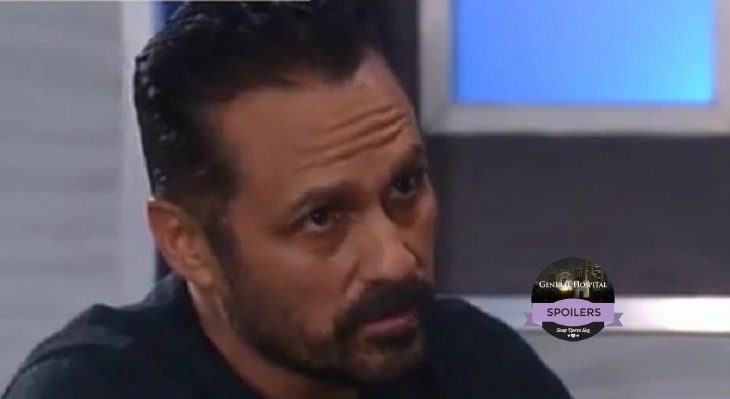 Carly Corinthos [Laura Wright] checks out the sexy new doc and will be surprised to learn that he’ll be treating hubby Sonny Corinthos [Maurice Benard]. Looks like Sonny may exclude Carly from his appointment because he’s hiding the fact he can stand.

Griffin calls him on it and Sonny insists it needs to be kept a secret. Does Griffin know enough about Port Charles to know what line of work Sonny is in and that it’s mob biz that has Sonny sandbagging and pretending he’s not progressing?

Epiphany Johnson [Sonya Eddy] also gets a new job – is it something to do with Griffin? With Sonny? Can’t wait to see. Nathan West [Ryan Paevey] tells Nina Clay [Michelle Stafford] that he’s moving forward in his relationship with Maxie Jones [Kirsten Storms].

Nina will be thrilled that Nathan is getting closer to her right hand woman and wishes him the best. Dillon Quartermaine [Robert P Watkins] is also getting closer to Maxie as they work on the next issue of Crimson.

It sounds like Dillon wants to put Maxie in the magazine. Maxie would love that – but will Nina agree? And how long until Nathan gets jealous of the attention on his GF? Speaking of jealousy, looks like Alexis Davis [Nancy Lee Grahn] may be experiencing some twinges herself.

Olivia Falconeri [Lisa LoCicero] and Julian Jerome [William deVry] hang out and talk at the office and their cozy banter makes Alexis uncomfortable. We know Julexis will wed soon, but Alexis is not so sure she wants Julian that comfy with his other baby mama.

Alexis also needs to talk to Michael Quartermaine [Chad Duell]. She asks if he’s replacing her – is that about ELQ? He’s head to head in fight with Nikolas Cassadine [Tyler Christopher] so it does seem questionable to have another Cassadine acting as the ELQ lawyer. Is that the issue?

Hayden Barnes [Rebecca Budig] meets Tracy Quartermaine [Jane Elliot] at the MetroCourt and flashes her new ring and tells her she locked down Nikolas. Tracy will be elated but then Hayden will pop that bubble when she pushes back on Tracy’s demands.

Look for Tracy to make threats and more drama to ensue. Nikolas is also dealing with a wedding confrontation. Laura Spencer [Genie Francis] is not happy that he eloped with Hayden. She reminds her son of the litany of problems with this pairing.

Will Laura’s questions and comments be what pushes Nikolas to sit down and Google his new wife? What will Nikolas find out? We know Nik and Hayden have some steamy scenes ahead so whatever he finds out, he won’t stop bedding her…

All this and more on the Wednesday, February 10 episode of GH. Don’t miss a moment and come back to Soap Opera Spy for more ‘General Hospital’ spoilers and news.