‘General Hospital’ Spoilers: Will Ava Finally Be Punished For Her Crimes? 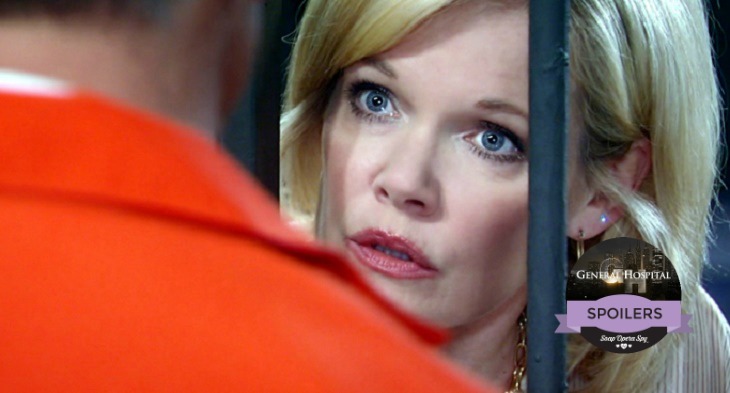 ‘General Hospital’ spoilers tease that Paul (Richard Burgi) may soon tell Jordan (Vinessa Aintoine) everything he knows on Ava (Maura West), including handing her over the flash drive that incriminates her in Connie Falconeri’s ( Kelly Sullivan) murder which occurred back in August of 2013.

In the most recent episode of General Hospital, we saw Paul in jail after Anna (Finola Hughes) and Dillon (Palmer Watkins) rescued his mother, Tracy Quartermaine (Jane Elliott) and saved her from another murder at the serial killer’s hands. Now that Paul is incarcerated for his many murders and is awaiting punishment, he certainly has nothing else to lose.

Related: Will Morgan Make A Move On Nelle After He Catches Kiki Calling Dillon?

We also witnessed Ava paying Paul a visit in jail and pleading with him not to turn over the evidence that he still has on her many crimes, including a murder she herself also committed. Just a few weeks ago, we saw Ava make a deal with Paul and held over his head the fact that she had proof that Paul was the killer just as he had proof that she had killed Connie.

Now that the Port Charles Police Department have found the killer, will he tell all he knows to Jordan and share a cell with Ava over the murders in which they have both committed or will he keep it to himself? Of course, it is more likely, he will tell on Ava and try to cut a deal to save his own neck.  Ava knows she has no further leverage on Paul to stop him from talking so at this point all she can do is appeal to his good conscience, that is if he has one at all.

We might also ask the question, will Ava be found out when it comes to Morgan Corinthos and her role in switching his medication from Lithium to an ineffective placebo? We do know that Andre (Anthony Montgomery) visited with Morgan recently and they both discussed his present situation and Morgan told his doctor that he feels he is no better. Morgan stated that he felt like he was “losing it”. Andre, of course, ordered some blood work on Morgan.

Will this blood work show any indication that he is not taking Lithium at all? Will anyone figure out Ava’s role in this and how bad will it get for Ava on the Corinthos front once they put the pieces together? Will Morgan realize that his medication is not his medication after all? Sonny (Maurice Benard) and Carly (Laura Wright) know now that Morgan is off and will they figure out why before the worst happens? We hope so! Stay tuned!