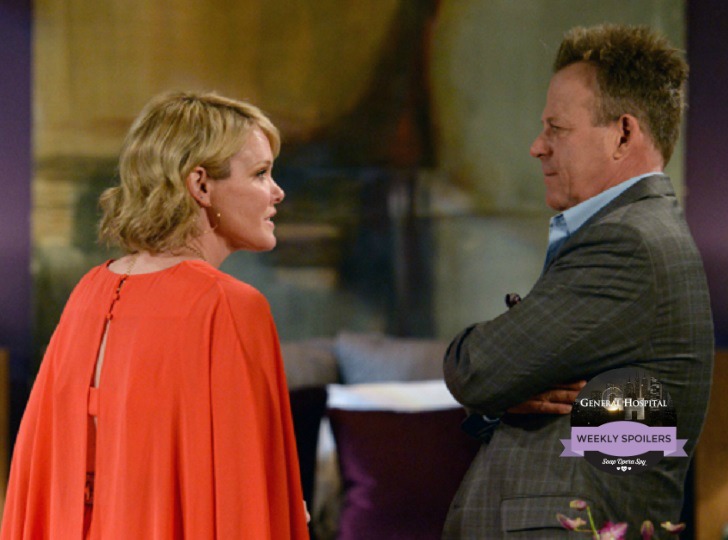 ‘General Hospital’ (GH) spoilers for the week of Monday, March 28 through Friday, April 1 reveal many will be shocked by the Hayden reveal, Sonny makes a move on Julian, Jason gets closer to the Quartermaine’s, and a recovered Kiki tries to help Morgan heal. Here’s what’s coming.

Ava Jerome [Maura West] is terrified of mob threats and appeals to someone who knows her ugly secrets – Scotty Baldwin [Kin Shriner]. Ava pays him to move in with her which surprises Franco [Roger Howarth] and Julian Jerome [William deVry].

Tracy Quartermaine [Jane Elliot] recovers from her illness and is ready to tackle the ELQ lawsuit with her secret weapon. Tracy and Michael Quartermaine [Chad Duell] will soon face off against Nikolas Cassadine [Tyler Christopher].

Looks like Jason Morgan [Billy Miller] will get involved since he feels a tug towards the Q’s as family. Ned Ashton [Wally Kurth] is back and Tracy is thrilled – that means he can join the fight and he’s got some good dirt on Nikolas.

Kiki Jerome [Hayley Erin] is recovering and has made it her mission to help Morgan Corinthos [Bryan Craig] get better. Morgan is determined to get back to a normal life. Looks like Kiki will have some shooting flashbacks, though, that trouble them both.

Related: Sonya Eddy To Appear On Primetime Show ‘My Crazy Ex-Girlfriend’ On The CW

Kiki has a major request for Ava that has to do with Morgan. Kiki’s idea will help Morgan get out of the doldrums and feel better about life. What could it be? Looks like these two are fated for each other – but can they make each other stronger or drag each other down?

Anna Devane [Finola Hughes] teams up with someone unlikely. Is it Sonny Corinthos [Maurice Benard]? This week Sonny brings in a mob IT guy [cameo by ESPN’s Stephen A Smith who is a GH superfan]. Sonny has him bug someone’s phone – maybe Julian’s…

Then Sonny taunts Julian with the knowledge that Carlos Rivera [Jeffrey Vincent Parise] is alive. Julian, meanwhile, has an offer he may not be able to refuse. Is this more mob stuff since he vowed to try and help out Ava with the Jerome henchmen?

Kristina Corinthos [Lexi Ainsworth] has a big talk with her mom. Julian offers Alexis Davis [Nancy Lee Grahn] some sage advice for how to deal with her kid. Kristina will be surprised at how her mom reacts to her big news and it’s a good thing for Kristina.

Emma Drake [Brooklyn Rae Silzer] is back this week for a few episodes. Also guesting is Fab Life’s Joe Zee who will play a guest editor for Crimson that Nina Clay [Michelle Stafford] brings in. Julian is frustrated that Nina keeps saving the mag.

Curtis Ashford [Donnell Turner] finds no competitor sabotage and Julian tells Nina to let it go. His reaction has Curtis digging deeper and finding the ugly truth that the sabotage is closer to home. Nathan West [Ryan Paevey] shares some ugly truth with Maxie Jones [Kirsten Storms] this week.

Hayden won’t go down without a fight, though, and soon blackmails Nikolas over the shooting. Curtis offers his services to Nikolas – is that at Hayden’s request? Or is Curtis going behind Hayden’s back since he has inside info the prince might pay for?

All this and more on the GH the week of Monday, March 28 through Friday, April 1. Don’t miss a moment and check back with Soap Opera Spy every day for more ‘General Hospital’ spoilers and news.