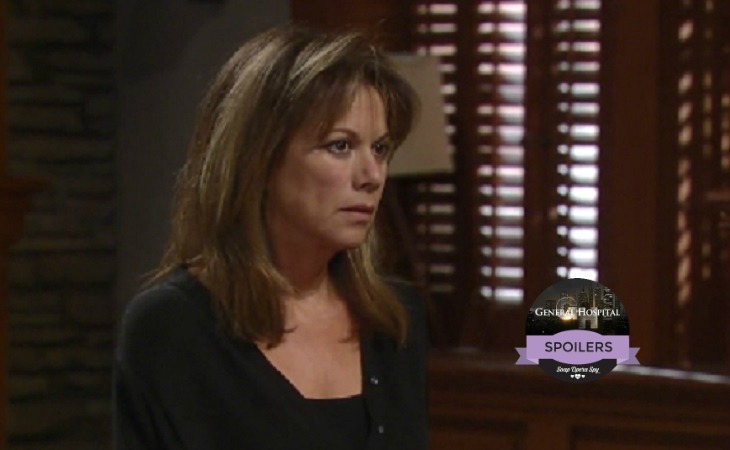 ‘General Hospital’ (GH) spoilers for Wednesday, June 29 reveal that Maxie freaks out on Nathan, Dillon won’t go down without a fight, Griffin wants to come clean to Anna, plus Alexis and Julian have to confront what her pregnancy means.

Nathan West [Ryan Paevey] comes over to Maxie Jones’ [Kirsten Storms] apartment and walks right in like he always does but this time Maxie flips out. Maxie was checking out her wedding dress and that’s what Nathan walked in on.

Maxie tells him to close his eyes fast and then she worries that this is a bad sign and she’s cursed to bad luck when it comes to weddings and marriage. Can Nathan calm her down and reassure her that she’s got nothing to worry about?

Carly Corinthos [Laura Wright] talks to Morgan Corinthos [Bryan Craig] and wants an update on his relationship status with Kiki Jerome [Hayley Erin]. Morgan is optimistic about it, but how will he feel about his mom asking questions?

Dillon Quartermaine [Robert Palmer Watkins] finds Kiki and tells her that he won’t give up on romance with her without a fight. Dillon wants them to give it a try but Kiki just gave Morgan hope that they were back on – what will Kiki tell Dillon?

At GH, Dr Griffin Munro [Matt Cohen] talks to Anna Devane [Finola Hughes] and tells her he wants her forgiveness. But what is that about? Other than not telling her he was a priest (and some light stalking), what has Griffin done to Anna?

Julian Jerome [William deVry] will get physical with Sonny Corinthos [Maurice Benard] after Sonny dropped the bomb on Julian that Alexis Davis [Nancy Lee Grahn] is pregnant. Sonny tells Julian to get his hands off him so how far will it go?

Alexis says out loud “I’m pregnant” but is she telling herself that or is she spilling the baby beans to Kristina Corinthos [Lexi Ainsworth]? This seems like really bad timing for a baby since she’s facing murder charges and has a grandson.

Julian will make a surprising demand based on this baby news, but what is it and is it something he says to Julian or Alexis? It doesn’t seem like Julian has much leverage at all to make demands but it doesn’t look like that will stop him.

Sonny worries later that Morgan’s recovery and stability is pinned too heavily on his relationship with Kiki. Do Sonny and Carly want Morgan to take things more slowly with her? Share your comments below on these Wednesday, June 29 spoilers.

Plus, tune in to Soap Opera Spy every day for more General Hospital spoilers and news.